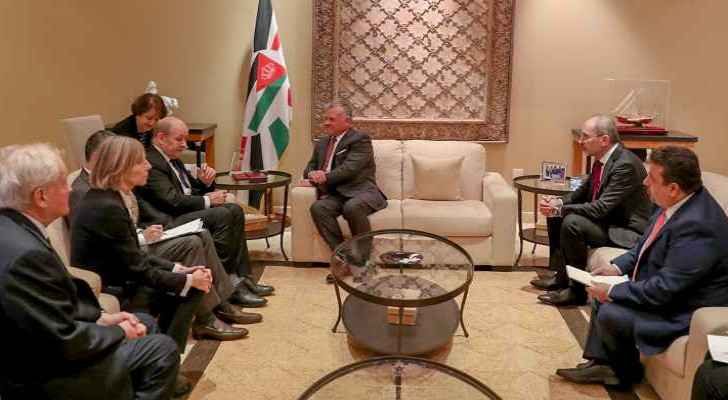 His Majesty King Abdullah II met with the French Minister of Europe and Foreign Affairs, Jean-Yves Le Drian, and the accompanying delegation in Amman, on Sunday, January 13, 2019.

The meeting discussed strategic relations between Jordan and France, along with regional developments.

His Majesty expressed Jordan's appreciation for France's support for many development programs in the Kingdom, stressing the importance of working with France to achieve security and stability in the region.

The King also stressed the need to intensify international efforts to end the Palestinian-Israeli conflict based on the two-state solution that leads to the establishment of an independent Palestinian state with East Jerusalem as its capital, adding that France's role in this regard is considered very important and essential.

The meeting dealt with the need to reach a political solution for the Syrian crisis, which preserves the territorial integrity of Syria and its people.

The Jordanian Minister of Foreign Affairs and Expatriate, the Advisor to His Majesty the King, the Director of His Majesty's Office, and the French Ambassador to Amman attended the meeting.