Jordanian taxi drivers to go on open-ended strike this month 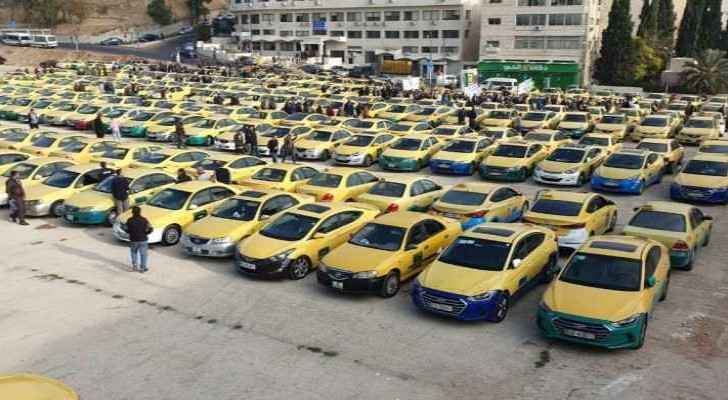 Representatives of the taxi industry (yellow cabs) announced that they will be going on an open-ended strike starting 15 January, 2019, to protest against ride-hailing apps in the Kingdom.

Saddam Abu al-Sondos, Spokesperson for the Syndicate of Jordanian Taxi Owners, said that the strike will take place in Amman, Zarqa, Irbid and Balqa, adding that more than 6,000 drivers are expected to take part in the protests.

This time around, taxi drivers will demand the immediate and complete ban of ride-hailing apps, due to ride-hailing firms’ failure to comply with the government’s instructions, according to the Syndicate.

Meanwhile, Transport Ministry Secretary General Anmar Khasawneh said that the ministry has responded to the majority of taxi drivers’ demands, which come up to nine demands in total.

The official said that the two remaining demands are currently being reviewed, while noting that banning ride-hailing apps altogether is out of the question.

Which demands have been met? Khasawneh said that some of the most important steps that were taken to meet taxi drivers’ demands were to require each ride-hailing car to stick a badge on the windshield to identify itself. Since taking this step, the number of cars identified as ride-hailing vehicales increased by 15%.

The Syndicate of Jordanian Taxi Owners had held several meetings with the Ministry of Transport in 2018, which were attended by representatives on behalf of taxi drivers and members of the current and former Parliamentary Transport Committee.

The Syndicate had given Prime Minister Omar Razzaz a list of their demands on 13 November, 2018, which included:

- Limiting the number of ride-hailing cars

- Ride-hailing drivers must obtain a taxi driver’s license (A taxi license has a market price of a minimum JD 40,000)

- Allowing only the car’s owner to drive it

- Terminating the service of unlicensed cars

Uber and Careem, the biggest two ride-hailing apps in the country, had banned registered drivers who had not completed the licensing procedures from using their services.

The ban on ride-hailing apps was lifted in June 2018, making Careem the first such app to be formally approved by Jordan’s Land Transport Regulatory Commission (LTRC).

Amman's taxi drivers want Careem and Co. kicked to the ....