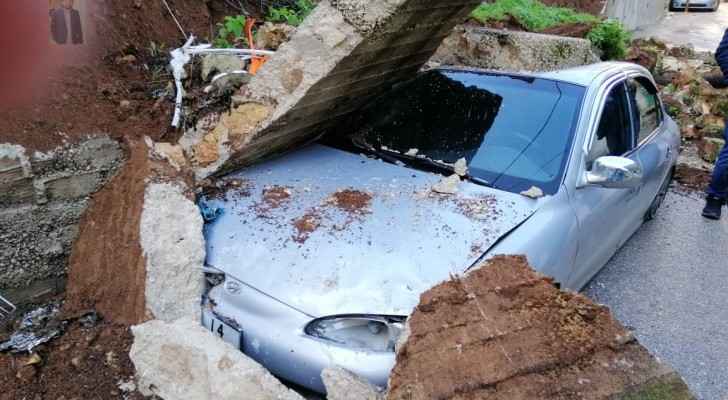 A concrete wall collapsed on a vehicle owned by a resident of Kufranjah in Ajloun after heavy rainfall that hit the area yesterday.

The collapse of the 20-meter long and 4-meter high wall pulled down electrical and telephone poles with it, without causing any casualties.

The district administrator and a team of engineers and technicians inspected the extent of the damage caused by the collapse of the wall to decide on measures to be taken, Mayor of Kufranjah, Nour Bani Naser told Petra News Agency.

The Mayor explained that Irbid's Electricity Company and the Telecommunication Company were contacted to remove the poles that fell, adding that the Municipality of Ajloun will set procedures to maintain public safety and remove the backfills from the top of the wall and to bring the area back as it was before.

He added that many areas in Ajloun are witnessing mudslides due to rain and the nature of the soil, which threatens other roads of collapse at any moment.