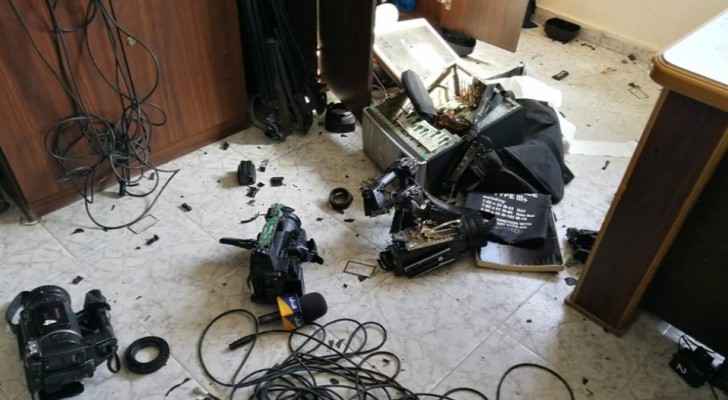 The attackers “destroyed cameras, editing and broadcast equipment worth nearly $150,000,” according to Qidra.

The attack could exacerbate tensions between Abbas’s Palestinian Authority (PA) and the Hamas movement, which has been ruling the Gaza Strip for over a decade.

“Whoever rules in Gaza must afford protection to everyone here,” Qidra told Reuters.

Palestine TV broadcasts “material supportive of Abbas’s Western-backed Authority, whose power base lies in the West Bank,” according to Arab News.

Chairman of the Palestinian Broadcast Corporation (PBC), Ahmed Assaf, said that “Hamas is deeply involved in this conspiracy.”

A statement issued by the PBC said the attack was a “clear reflection of the mentality of the Hamas movement and criminal gangs who believe only in their voice, and who seek to suppress freedoms.”

On Saturday, 6 January, Hamdallah said at a protest gathering against the attack that the PA intends to compensate Palestine TV for the damages caused to its offices.

However, Assaf noted that getting Israel to agree to allow new cameras and equipment across the border to Gaza will not be an easy task, reported WAFA news agency.

He said that the destroyed cameras were used to expose Israel’s anti-humanitarian acts against Palestinians in Gaza.

Eyad Al-Bozom said in a statement issued by the Hamas-run Interior Ministry in Gaza that “what happened is rejected, and we condemn it,” while urging the station’s officials to cooperate with investigators.

Following the attack on Friday, the station was able to continue broadcasting from Gaza.