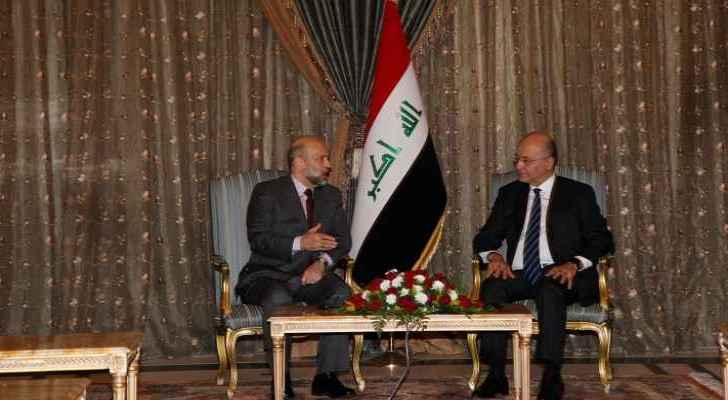 Iraqi President Barham Salih received Jordanian Prime Minister Omar Razzaz at the Palace of Peace in Baghdad on Saturday, December 29, 2018.
During the meeting, which was attended by members of the official delegation accompanying PM Razzaz and senior Iraqi officials, the Iraqi President stressed his country’s keenness to develop relations with Jordan, and the importance of strengthening ties of brotherhood and developing constructive cooperation between the two countries.

For his part, PM Razzaz said that the visit of the Iraqi president to Jordan last month left a great impact on the promotion of common relations, pointing out that His Majesty King Abdullah II directed this visit to open new horizons of cooperation, exchange, economic integration and political and security coordination.

Razzaz also stressed that the yesterday’s talks resulted in decisions which will be implemented according to a timetable, and that this work will invest opportunities in cooperation and will find solutions to all outstanding issues.
Razzaz said that a number of opportunities have been identified for investment in important sectors, such as transport and trade through Al Karama-Trebil border crossing between Jordan and Iraq, the oil pipeline, the electric grid, the Aqaba port, and cooperation between the Royal Jordanian and Iraqi Airways, as well as many other fields.

Razzaz stressed that what characterized the meetings yesterday was the determination of both parties and the deep understanding of the importance of political and economic strategic integration, in addition to overcoming any difficulties and taking practical decisions that serve the interests of the two countries.

PM Razzaz said that the timetable for implementation of these projects will begin on February 2, 2019, and will include decisions to establish a joint industrial zone on the border area, and exemptions for a range of goods between the two countries.

Amman Chamber of Industry exports up by 9% in first nine ....

Amman Chamber of Industry exports up by ....