King: There are some who exploit difficult situations to gain personal popularity

King: There are some who exploit difficult situations to gain personal popularity 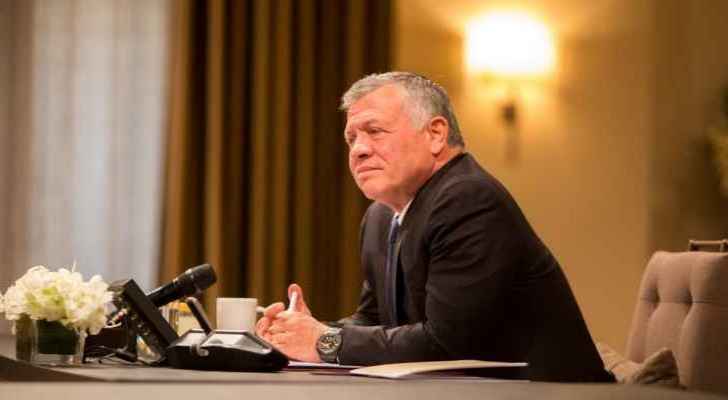 His Majesty King Abdullah II expressed his optimism in Jordan’s future potential, noting that the ball is now in the government’ court and that political powers and the society should benefit from this.

During a meeting with a number of journalists at the Husseiniya Palace on Sunday, King Abdullah voiced his surprise by those who underestimated the potential of Jordan, and those who do not have the ambition to realise it, describing them as exploiters of difficult situations to gain popularity for themselves."They pretend to be with the people and to be concerned over their interests, in an attempt to gain fame at the expense of the nation," His Majesty said.

The King added: "Jordan has been through tough times over the past years, and I am fully aware of what is taking place in my country, in the region, and in our world."

His Majesty said conditions have started to improve, noting that "Gulf countries have stood by us, and we appreciate that. The whole world, including Europe, Japan, and the United States has also supported us."

"Our international relations have never been better, to the extent that the United States has increased the assistance it provides for us, and we are grateful for their support," the King continued.

His Majesty noted that conditions in Syria are improving, "and we wish Syria well."

"God willing, it would be business as usual once again, and conditions in Iraq have been notably improving. We are in constant communication with them to open markets to our products, and the prime minister will be visiting Baghdad before the end of the year," the King said.

His Majesty also noted that he is following the improvement in the tourism sector.
"My message to the prime minister, officials, deputies, senators, and all political powers is that the answer lies in economic growth and promoting investment," His Majesty said.

"I advise officials not to hesitate. We have overcome the tough decisions and we must now focus on economic growth, investment promotion, improving services, and providing job opportunities for youth," the King noted.

His Majesty continued: "Some are saying focus is being given to economic reform at the expense of political reform, disregarding the fact that we worked for a long time on thorough political reforms that led to an election law in 2016 that was widely accepted as a modern piece of legislation.

"The single vote [system] was scrapped, and the proportional lists requested by the people were adopted."

The King added: "At the time, even [the Muslim Brotherhood] who had opposed the previous law accepted the new one."

"The current law may require some minor amendments here and there, and I support that. But at its core, it is a strong law," His Majesty stressed.

The King said: "Everyone wants a law that gains consensus, although we have already agreed on this. Today, the ball is in the court of political powers, which must form parties and win votes. I will not hold people’s hands and form their parties for them."

"We have set the grounds for democracy. The rest is up to them. From the very beginning, with the Discussion Papers, I supported this direction. And I am in contact with a number of [parliamentary] blocs, officials, deputies, senators, and political parties and powers. With the start of the new year, I will step up this communication. We must also focus on the role of youth, which is very important," His Majesty added.

The King said "the last elections were transparent and open to international monitoring institutions, which commended their integrity," adding that the people are ready for democracy but political powers must organise themselves.

"The country needs people who roll up their sleeves and work honestly and courageously, not those who hide behind their desks," His Majesty affirmed.

"I hope rumours are avoided," the King said, noting that he is considering the appointment of a spokesperson or a media adviser at the Royal Hashemite Court to "deal with this distortion of information that I keep hearing".

The King pointed out that the London conference will be held early next year in support to Jordan’s economy and to promote investments. His majesty added that a conference will also be held at the Dead Sea with the participation of the government, the Senate and the House of Representatives, the private sector, professional associations, civil society institutions, youth, and the media to identify the coming phase’s priorities in the economic sector.

His Majesty said that these priorities should be clarified to the Jordanian society in order to enhance trust between citizens and institutions. His Majesty stressed the importance of working on the development of the governorates and providing job opportunities for youth.

His Majesty referred to the importance of administrative reform and the need to accelerate the completion of the e-government program to facilitate procedures to citizens and investors.

His Majesty stressed the importance of the role of the media in expressing opinions and suggesting identifying economic priorities and opportunities.

The meeting covered local and regional issues, with His Majesty affirming Jordan's firm stance on the Palestinian cause, which is known to all.

King Abdullah reiterated that Jordan and the growing importance of Jordan's armed forces - the Arab Army and the security agencies - are capable of protecting the Kingdom’s borders and safeguarding its achievements.
"There is no fear over the security of our borders," the King said.

For their part, the attending media figures stressed the importance of working according to practical action plans to improve the performance of the Jordanian economy, attract investments and develop services, and continue the process of administrative reform.

They noted the importance of developing governorates and granting governorate councils the authority to identify development priorities and implement small and medium sized projects that would improve services and development.

They also praised the efforts made by His Majesty the King to establish economic cooperation relations with a number of countries around the world, stressing the importance of building on these efforts to attract investments and enable Jordanian products to penetrate international markets.

They stressed that the media has a great responsibility in spreading the positive spirit and instilling a culture of hope and highlighting the achievements made by Jordan over the past years, despite the difficult circumstances surrounding the region.

They also stressed the importance of moving forward with economic and political reforms, and developing laws that boosts the citizens’ engagement in the decision-making process.