The protests lasted for for more than seven hours, marking the third consecutive week of protests near the Fourth Circle. (Roya) 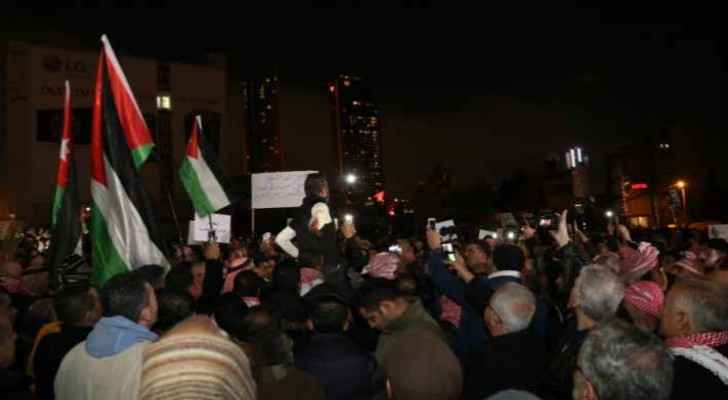 Thursday night saw dozens of Jordanians protest for their rights near the Fourth Circle. Protesters came to Amman from different parts of the Kingdom to demand better living conditions, constitutional reforms, the release of political activists, fighting corruption, dismantling Parliament and not passing the new Cybercrime Law.

While the majority of protesters stuck to peaceful methods of getting their points across, others didn’t.

Security forces arrested several civilians who were dressed in fake military uniforms and tried to cause friction between them and the protesters.

Meanwhile, Darak forces, who were deployed in large numbers from the Fourth Circle to Shmeisani, were forced to use tear gas after a group of protesters dismissed their orders and tried to leave the vicinity of Jordan Hospital, where the protests were taking place.

The protesters were told not to make their way to the Fourth Circle or towards Shmeisani, where the Ministry of Interior is located, however, those protesters were not to listen, and intentionally blocked the main road by sitting or lying in the middle of it, while others climbed on top of people’s houses for no apparent reason.

During the confrontations, ten security personnel were injured, according to the Public Security Directorate (PSD).

Several protesters also appeared to have been injured during the protests in a video shared on social media. To maintain their safety, members of the press were advised to avoid “areas with friction and random group gatherings.”

The protests lasted for for more than seven hours, marking the third consecutive week of protests near the Fourth Circle.

Jordanians protest near 4th Circle with their red shemaghs ....

Jordanians protest near 4th Circle with their ....

Jordanians protest near 4th Circle with their ....

Jordanians protest near 4th Circle with ....