Israeli soldiers closed off the entrances to Ramallah on Thursday. (Roya) 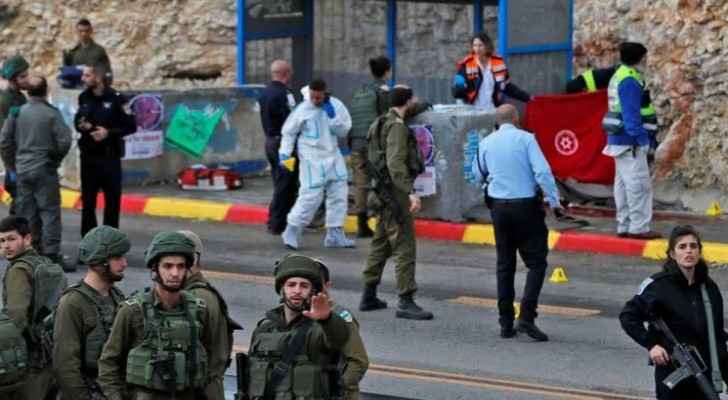 All entrances to the city of Ramallah in the West Bank were closed off by Israeli army units on Thursday, December 13, after a shooting attack that left at least three Israeli soldiers dead, WAFA news agency reported.

Several neighbourhoods in the city were then raided by the Israeli army and Israeli settlers, who attacked Palestinians in the northern entrance to Ramallah.

According to an eyewitness account by a Palestinian man who was at the northern checkpoint, known as the DCO, “an armored army vehicle rammed into his car and three others that were stuck at the DCO checkpoint after the army had closed it,” WAFA reported.

The witness said that a “raging group of settlers” then charged towards their cars and attacked them with stones. Meanwhile, Israeli soldiers looked on and encouraged the attack.

Several homes on the northern end of Ramallah were also raided by the army, as soldiers searched for the perpetrators in the shooting attack.

In protest of besieging their city, Palestinians marched to the DCO checkpoint, where they also protested the killing of three Palestinians on Wednesday and earlier in the day in the West Bank and East Jerusalem.

The protesters were met with tear gas and rubber-coated metal bullets.

Local sources said that on Thursday evening, the Israeli army sealed off the entrances to Al-Fawwar and Al-Arroub refugee camps in Hebron district in the southern West Bank.