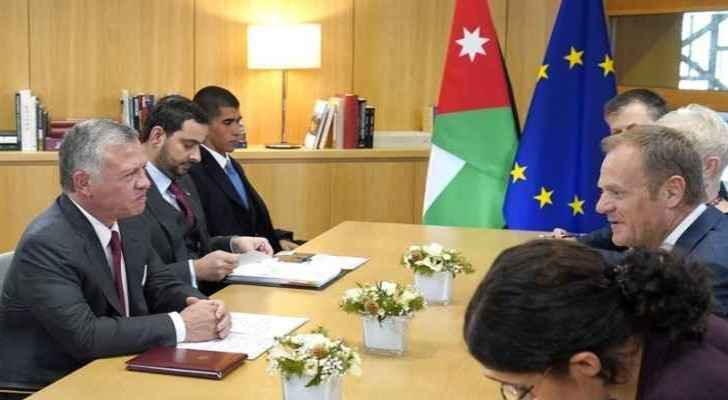 His Majesty King Abdullah II in a visit to Brussels met with the President of the European Council, Donald Tusk, to discuss prospects of expanding cooperation between Jordan and the European Union (EU) countries, on Wednesday, December 12, 2018.

His Majesty and Tusk stressed on the importance of Jordanian-European partnership to expand economic and military cooperation.

The meeting, which was attended by HRH Prince Abdullah Ben Ghazi, discussed the 2016 EU-Jordan rules of origin agreement, to facilitate exporting Jordanian goods to EU markets and spurring new investment opportunities in Jordan.

The meeting tackled the EU's support in regards to the Syrian refugee crisis which has burdened Jordanian economy.

His Majesty the King stressed the importance of the conference that Britain is hosting next year to support economy and investment in Jordan, which will focus on plans and programs to increase economic growth and create job opportunities for Jordanians.

During the meeting, King Abdullah and Tusk discussed the EU's role in pushing forward the Palestinian-Israeli peace process, and political solutions for the crises in the Middle East.