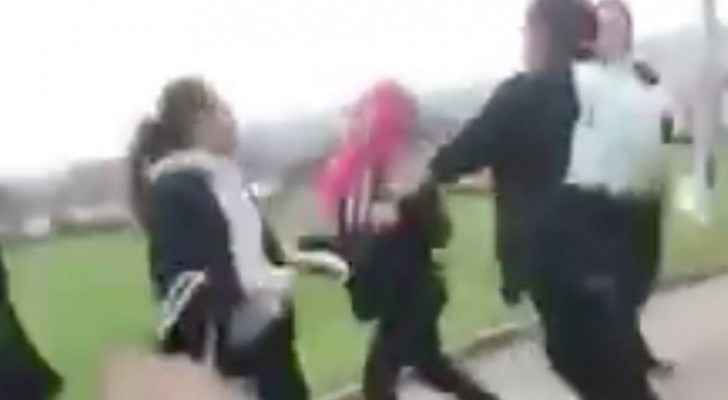 A Syrian refugee girl was attacked in a school in Huddersfield, West Yorkshire in the UK, almost a month after her 15-year-old brother was assaulted at the same school.

A video circulated on social media shows the boy’s sister being attacked by other pupils. The incident is said to have taken place on Wednesday, November 29, according to the Evening Standard.

The girl, who was wearing a pink headscarf, was shoved from behind and pushed towards a grass verge before falling to the ground.

West Yorkshire Police said in a statement: "We have been made aware of a video showing a girl being assaulted at Almondbury Community School.

"The incident had not previously been reported to the police but we are now liaising with the girl's family who we are continuing to support."

In the first video, filmed on October 25, the girl's brother was shown being “dragged to the ground before water was poured into his face,” the BBC reported.

The boy’s father, who cannot be named for legal reasons, told the BBC the attack had left his son "very tired psychologically".

"Because of what happened in the video my son is shattered," he said.

"He is not concentrating on his studies. When he is asleep he wakes up saying they want to beat me up."

Trevor Bowen, headteacher of Almondbury School, told parents in a letter that "the safety and welfare of students is our number one priority and I can assure you that this situation is being taken extremely seriously."

A 16-year-old boy is to be charged with the refugee boy’s assault.

More than £100,000 have been raised for the boy and his family through an online fundraising page.

Man dies after being assaulted one month ago in Irbid

Man dies after being assaulted one ....