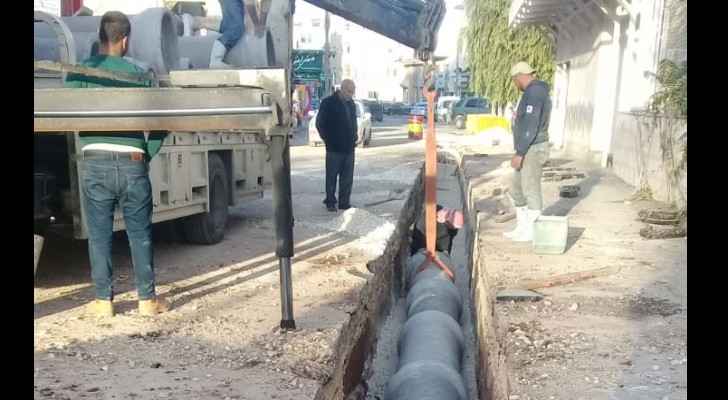 Greater Amman Municipality (GAM) completed the work on drainage canals in the capital of Amman at a cost of 6,500,000 Jordanian Dinars, while other projects are about to be completed with a total cost of 10,000,000 JD in its budget for rainwater drainage system.

The Mayor of Amman, Yousef Al-Shawarbeh, has directed the execution of rainwater drainage projects, calling it a priority. Since the rainfall season started, rainwater drainage systems have been implemented in various locations in the capital (Behind Queen Zain Street, on the street of Haram Bin Qutbah, in Taj Al Malouk Street behind Philadelphia Schools, Al Fath Street in Shafa Badran, Princess Areej Street in Jubaiha, and Mohammadia Street in Tlaa Al Ali).

Drainage trunks were also installed in the areas of Marj al-Hamam, al-Muqabalin, Wadi al-Sir and sections of Medina Street and Wasfi al-Tal Street.

GAM is currently working on a program designed to complete the rainwater drainage networks in Marj Al-Hamam near Al-Dalah Roundabout opposite the Nurayan Mosque.

GAM intends early next year to implement the drainages boxes and tubes in Yarmouk Street, and in Arar Street in the area of Abdali at a cost of 1,400,000 Jordanian Dinars. GAM is to monitor the drainage of rainwater so that it is ready to face any problems in case of different conditions arising at anytime.