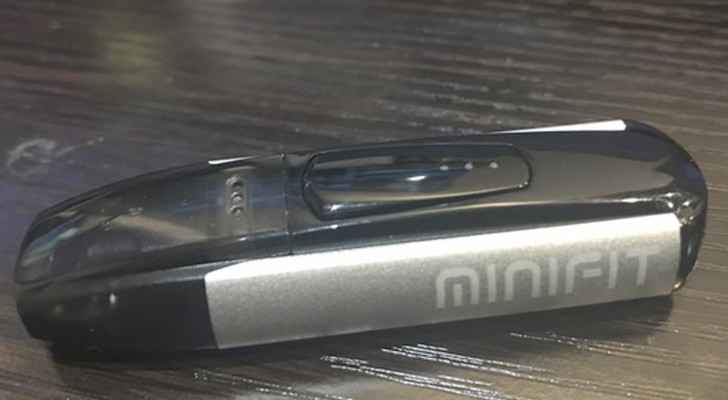 A new kind of e-cigarettes, which entered the local market illegally, is being used by smokers in public institutions and governmental departments, according to a report issued by Petra News Agency on Tuesday, November 27, 2018.

Those who smoke this new e-cigarette called “Minifit” consider it as less-dangerous because –according to them– it produces less smell, doesn’t include passive smoking, helps quitting the habit of smoking and doesn’t contain nicotine. However, the 50JD device is driving more young people –as young as school students– towards becoming smokers in a country that is considered one with the highest number of smokers, as stated in the World Health Organization (WHO).

Moath, an e-cig smoker, told Petra that he’s definite that this new and small cigarette is cheaper than regular tobacco.

Two 10th grade students in a public school in Zarqa Governorate share one of these e-cigarettes told Petra that they learned about this product through a social networking page.

"Lighter than tobacco," the two students asserted, quoting the seller of these e-cigs, that it will help them quit smoking and that it does not affect others. However, they admitted that they didn’t seek a medical opinion.

Abdullah, an engineer in a private company, said that despite warning signs and smoking ban regulations in the institution, e-cigarettes are being used. Abdullah confirmed to his colleagues that he is feeling much better after switching to smoking e-cigs, but his opinion is not based on a scientific opinion.

The Jordanian Ministry of Health confirmed that the import of all kinds of electronic cigarettes is banned, which is also prohibited in almost all countries. The spokesman of the General Customs Department confirmed that "this type is forbidden from entering the country and may have entered as an individual case."

Large numbers are ceased officially, added the spokesman, as the Department has advanced systems to detect and control the entry of large quantities intended for sale by traders. Those which entered into the market and are sold through social media sites do not fall within the scope of the Ministry of Industry and Trade.

“No importing-license was granted for this kind of e-cigarettes to any merchant," commented the Director of Trade in the Ministry of Industry and Trade, Dr. Issa Damour.

The Jordan Food and Drug Administration (JFDA) confirmed that it has not received any complaints about the existence of this type of cigarettes. According to its Director, Dr. Hail Obeidat, the product doesn’t fall under the jurisdiction of its work.

An official source in the Jordan Standards and Metrology Organization (JSMO) told Petra that “In the case of finding this type of prohibited cigarettes, the inspection team will be dealing with the issue in accordance with the law in order to ensure their elimination from the market."

JSMO have not received any complaint about this yet but "once a complaint is received, action will be taken immediately."

In a shop located in West Amman, Ayman sells these e-cigarettes without fear. Once asked about its availability, he responded with "Yes", which he promotes it via social media.

Dr. Hanan Sarafi, a Consultant of respiratory diseases at the Ministry of Health, said that passive smoking increases the risk of chronic lung disease, especially bronchial asthma and allergic conjunctivitis. Sarafi asserted that passive smoking causes pregnant women a number of health problems, notably the lack of weight of the fetus.

A study sponsored by the American Cancer Society reported that adult non-smokers are more likely to die from serious lung diseases if they grow up with smoking fathers, according to Dr. Sarafi.

Sarafi pointed out that exposure to cigarette smoke for 10 hours per week increases the risk of heart disease. The solution to all the problems caused by smoking, according to Sarafi, is to quit smoking, not to switch to other types of cigarettes, and to seek help from smoking cessation clinics which are present under the governance of the Ministry of Health as they provide medicines and scientific methods to help quit smoking completely.

According to the latest official statistics, the average expenditure on tobacco and cigarettes in a Jordanian household came in the second place with 558 Jordanian Dinars.

In 2018, there were a total of 400 registered cases against smoking offenses in public places.