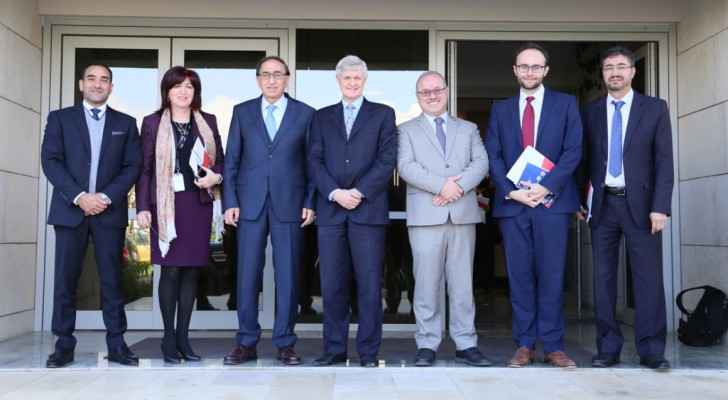 British Ambassador to Jordan, Edward Oakden, visited the AlHussein Technical University (HTU) in Amman, an initiative of the Crown Prince Foundation (CPF), on Sunday, November 25, 2018.
Oakden and his accompanying delegation were received by the President of the University, Dr. Labib Al Khadra, as well as deans and members of the faculties.

During the meeting, possible means of cooperation were discussed between the two sides. Dr. Al-Khudra presented the stages of development and modernization witnessed by HTU at various levels and its keenness on documenting cooperation with embassies and various international educational institutions in order to elevate the level of education and boost its rank among international universities.

The British Ambassador briefed the university on its programs and its new educational model. Oakden expressed his admiration of the quality education provided, which combines the outputs of higher education with the requirements of the market through real networking with the industrial and the IT sectors, which contributes to creating job opportunities for university students and fresh graduates through its training programs.

During his visit, Oakden also toured facilities and its high-level technical laboratories, which were established in collaboration with the private sector, such as the Virtual Reality Laboratory, the Cloud Computing Laboratory, the Renewable Energy Laboratory and the Advanced Communications Laboratory.

The visit included a visit to the Center for Innovation and Entrepreneurial Excellence (CIEE) at HTU, which was launched earlier this year, and currently embraces about 15 emerging technology engineering companies including renewable energy and transportation applications companies.

Al Khadra expressed his keenness to cooperate with British Universities and exchange expertise in recent approaches used in the field of higher education, pointing out the university looks forward to increasing cultural and academic exchange programs between the technical and educational institutions of Britain.

Founded by His Royal Highness Crown Prince Al Hussein in 2016, the university aims to provide an education that enhances the basic skills and technical disciplines required for the local market. The university is a true supporter of science, technology, engineering and mathematics and awards diplomas and BA degrees in engineering and Computer Science.