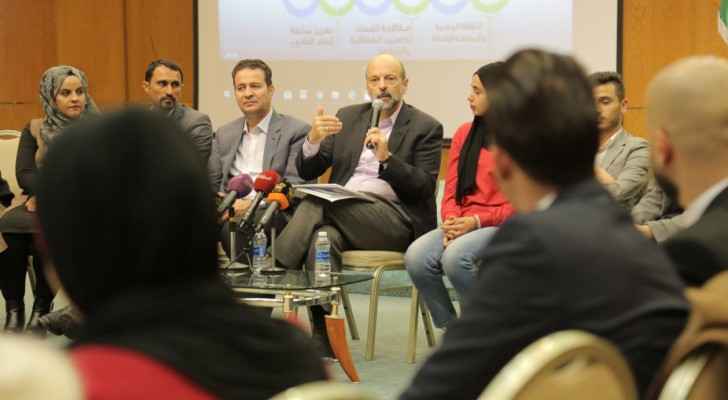 Jordanian Prime Minister, Omar Razzaz, met with a number of Jordanian youth from various local sectors on Saturday, November 24, 2018 at the Royal Cultural Center in Amman.

The group included heads of student councils as well as representatives from the Jordan Youth Commission (AJYC) and the Crown Prince Foundation (CPF), in the presence of Minister of Culture and Youth, Mohammad Abu Rumman, and Secretary General of the Prime Minister, Sami Daoud.

Razzaz said that the youth sector, despite the difficulties faced, have been witnessing various youth initiatives, which are encourages as they make a difference in the lives of young people. He added that the government, through its work program, focuses on funding and supporting young people in their work, pointing out the importance of giving young people the opportunity to lead the reform process.

He said that strengthening the Kingdom is based on following the law which is capable of ensuring development and prosperity. We are all governed by the law that prevails over all, he added.

In response to the Cyber Crimes, Razzaz confirmed that it is vital to respect the freedom of others. He stressed that the Cyber Crimes Law aims to deal with issues of insults, libel and defamation. In this regard, criticizing the government is a legitimate right, but the most important point is to be precise in dealing with these information.

On the reform of the public sector, he stressed the need to address the stereotype of the public service and the culture associated with public employment, pointing out that the platform is set to serve the citizen in submitting a complaint directly and efficiently.

On the concept of National Military Service, Razzaz confirmed that it came to boost the basic skills of citizens which work on a set of skills that are not deal with in schools, adding that it will combine the military concept in terms of control and professional skills in addition to giving the trainee a certificate at the end of service while focusing on youth unemployed.

The meeting also gave a chance to the youth group to present their observations concerning issues that are important to them, including the need to support their initiatives in various sectors, provide job opportunities and enhance their presence in political debates and the decision-making process.