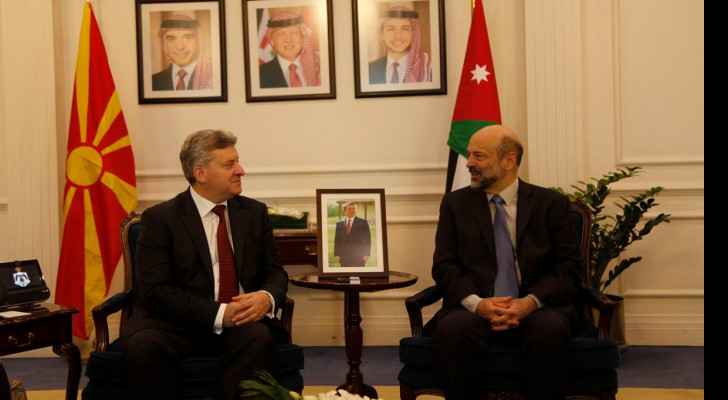 As part of his official visit to the Kingdom, President of Macedonia, Gjorge Ivanov, met with Jordanian Prime Minister, Omar Razzaz, on Monday, November 20, 2018. The President also visited Jordan’s Lower House of Parliament where he met with Speaker of the House of Representatives, Atef Tarawneh. Ivanov also paid a visit to the Senate where he held talks with its President, Faisal Al-Fayez.

Talks with Jordanian officials explored future opportunities and further cooperation and coordination between both Macedonia and Jordan in various fields including those in the economic, trade, investment, political, cultural, tourism an agriculture sectors.

During his visit to the Prime Ministry, Razzaz stressed that both Jordan and Macedonia have a broader cooperation potential as both countries face limited natural resource and rely on manpower resources. For his part, the Macedonian President expressed his hope for reaching agreements and for expanding joint-ventures and cooperation between his country and Jordan. During the visit to the Jordanian Lower House of Parliament, the President met with Speaker of Jordan's House of Representatives, Atef Tarawneh, where the two discussed several issues. During the meeting, the Macedonian president praised Jordan’s support to the Syrian refugees and commended the Kingdom’s continuous efforts in protecting stability, security and peace in the region. Meeting with President of the Jordanian Senate, Faisal Al-Fayez, the Macedonian President stressed that he looks forward to fostering ties with the Kingdom and broadening the scope of cooperation in all fields. Al-Fayez expressed Jordan’s keenness to strengthening the ties and thanked the president for his visit to the Senate. The meeting also discussed boosting the relations between the two countries in the economic, political, security and military fields.

Jordan and Korea look towards joint ....