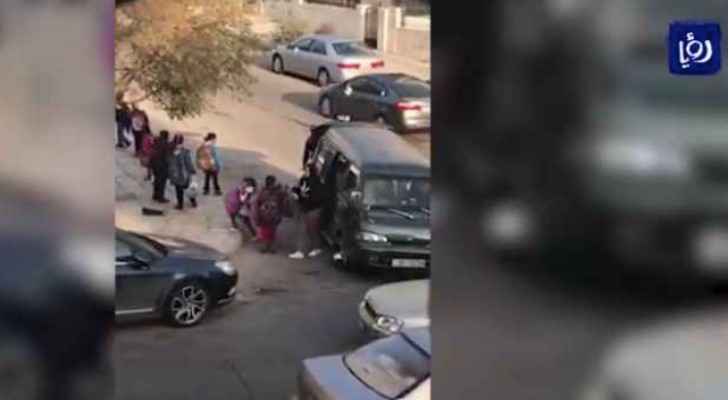 Roya received a couple of videos showing a private minibus, committing a few violations, while dropping off young students to school, in Amman, at 7 am on Thursday, November 15, 2018.

Violations committed by the minibus driver include carrying more than the allowed limit of five passengers. The first video shows 18 students getting off of the minibus, the second video, 14.

In another violation, the minibus driver drops off the students in an unsafe manner and place, and above all that, he also collects fees for the journey.

This phenomenon has spread between the neighborhoods of the capital Amman. Authorities have been trying to limit and control the situation, but apparently in vain.

This is a shock, according to the woman who took the video. The disregard for the safety of the children could lead to accidents and disastrous consequences. She said that these buses carry large numbers of students in the rear hatch of the bus. Mini buses are licensed for 5 passengers, and are not allowed to collect fees, she added.

It is noteworthy that some of these students’ parents justified sending their children to school in small private transport buses because they live too far away from the schools, in addition to the lack of financial capacity to provide safer transportation for their children, which constitutes a threat to the community and the safety of these children.

In general, children spend up to two hours a day in buses. Spending that much time in overcrowded buses, is a disregard to their safety and well-being.