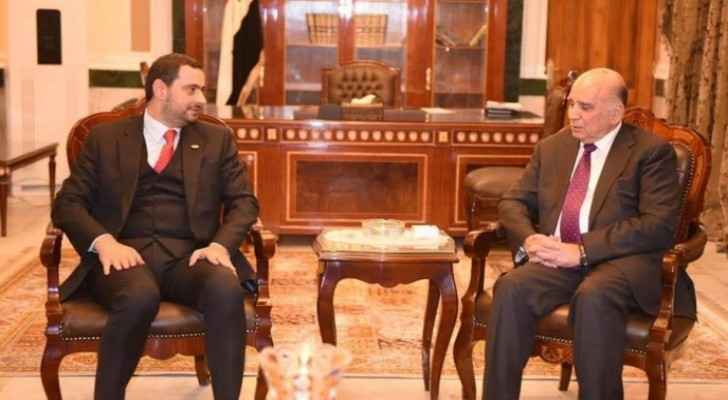 The meeting, which was held in Baghdad, discussed ways of enhancing the Jordanian-Iraqi economic cooperation in various fields, removing obstacles faced by the trade between the two countries and stimulating the private sector to establish investments in order to serve the two brotherly countries.
The two parties emphasized the importance of intensifying efforts of enhancing relations in all fields, especially in economy, through increasing the volume of trade, investment, sharing expertise and through cooperation in the reconstruction of Iraq.

While talking to Iraqi Deputy Prime Minister and Minister of Finance, Fuad Hussein, Hammouri called on further facilitating the entry of Jordanian products into Iraq by exempting them from customs as granted by the Jordan-Iraq free trade agreement.

Hammouri also stressed on the importance of establishing a joint industrial zone located on the borders between the countries and on means of speeding up its establishment, as it will directly result in boosting economic cooperation and creating more joint-investments.

Confirming the Iraqi government’s interest in achieving the same goals, the Iraqi Minister, Fuad Hussein, also expressed his support for Jordan's proposal to exempt its exports from customs duties. He also addressed the necessity of raising the level of co-trade.

Hussein asked of the Jordanian government to provide expertise in managing public Iraqi companies as Jordanian expertise may also help in the fields of management, technology and banking.

Hammouri also discussed with the Iraqi Minister of Housing, Bangin Rekani, means of cooperation in the housing and reconstruction. Hammouri affirmed Jordan's readiness to employ all resources and skills in helping Iraq in various fields.

“The Jordanian private sector has great potentials and has extensive experience and relations with its Iraqi counterpart, which makes it ready and able to contribute to the reconstruction process of Iraq,” Hammouri said, calling on the Iraqi government to allow Jordanian companies to take part in this process.

Hammouri confirmed the importance of rehabilitating the Jordan-Iraq Trebil Border Crossing and raising its capacity to deal with trade and transportation movements between the two countries.

Rekani explained that Iraq is on the threshold of initiating large-scale projects in the field of reconstruction and that Jordanian companies have what it takes, urging them to benefit from these projects through submitting tenders that will be publicized accordingly.

He pointed out the importance of overcoming the obstacles facing the trade cycle through the rehabilitation of the Trebil Border Crossing and raising its readiness to serve the two countries.