Little girl dies, another saved in the Madaba floods

Rescue teams save passengers in a car that was swept away by floods in Madaba on Friday, November 9, 2018. (Roya) 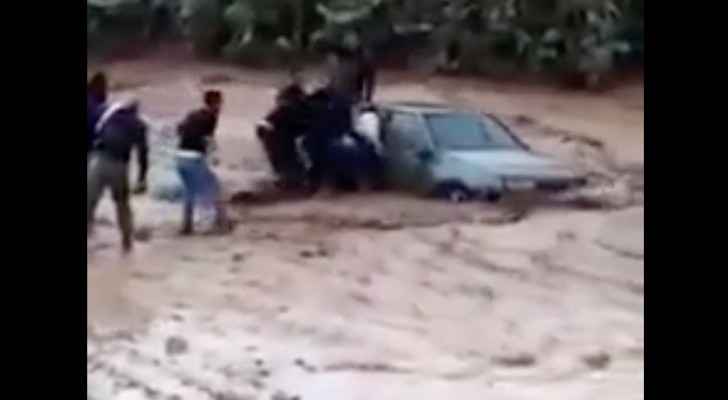 A child whose parents’ car was swept away by heavy floods in Madaba was saved from drowning on Friday evening, a source from the Civil Defense has said.

Another girl was not as lucky; she died after her parents' vehicle was also swept away by the treacherous currents.

Civil Defense search and rescue teams, including divers, are currently searching for any survivors.

Heavy rain has continued to fall south of the Kingdom on Friday, with Arabia Weather warning that the weather will get worse, the rain will get heavier, the sky will get cloudier and low areas and valleys will be flooded.

Wadi Musa in Ma’an is currently experiencing severe floods that the area has not witnessed in decades.

Amman is expected to experience heavy rainfall, thunderstorms and possibly hailstones this evening.

Roya’s reporter in Petra said that the Madaba-Theeban road is currently closed due to the high water levels in the area and the flooding due to the heavy rainfall in Madaba.

The road closure has led to severe congestion, while authorities are trying to divert cars onto safer routes.

Meanwhile, a state of emergency has been announced in Karak, while special Civil Defense teams have been formed to be quickly able to deal with any weather-related emergencies.

Citizens in south Jordan and across the country have been warned to stay away from valleys and low areas and to remain indoors in case of heavy rain, and to only leave their homes if they really need to.