At the scene of the attack, a car burst into flames outside outside Target on Bourke Street. (Herald Sun) 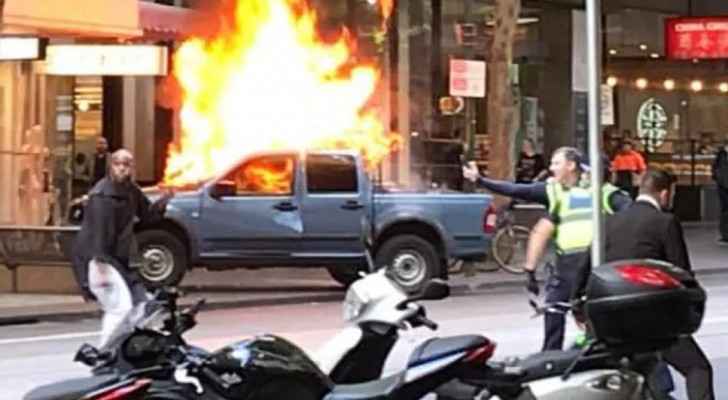 A man was fatally stabbed and two others were injured on Friday, November 9, in what Australian police are treating as a terrorist attack in Melbourne. The incident took place on Melbourne’s Bourke Street mall, and it was captured on video from several angles by bystanders.

Police shot the knife-wielding attacker - after he stabbed three people - on the spot, as he tried to stab them with his weapon. The suspect’s chest injury was severe; he succumbed to his wound later that night in hospital.

At the scene of the attack, a car burst into flames outside outside Target on Bourke Street, between Swanston and Russell Streets, about 4.20pm.

Isis has claimed responsibility for the attack, "saying in a statement through their Amaq news agency that the man was one of their 'fighters'," The Independent reported.

Chief commissioner Graham Ashton told the press that “the attacker was known to police and federal intelligence agencies,” The Guardian reported.

“What we know so far about the individual ... from what we know we are treating this as a terrorism incident,” he said.

“We believe we have confirmation on the identity [and] there are ongoing investigations being conducted by counter-terrorism. I am not at liberty to disclose the identity of this person.”

“He is known to police, mainly in respect to relatives that he has that are persons of interest to us. He is someone who is accordingly known to Victoria Police and the federal intelligence authorities.”

The suspect had moved from Somalia to Australia in the 1990s, lived in the north-western suburbs of Melbourne and his criminal record included a minor offending history of drug, theft and driving offences.

Ashton added that “fire and rescue discovered barbecue-style gas cylinders inside the car,” according to The Guardian.

“A four wheel drive, utility, drove into Bourke St between Russell St and Swanston St and parked there,” Ashton said. “One male person was in the vehicle. A fire was then started in that vehicle. He got out of the vehicle, engaged with some members of the public at that location. Almost within a minute, Victorian police officers were in attendance in an unmarked vehicle.

“If there are witnesses to this event, eyewitnesses, we would like to talk with them and we’d ask if they could attend any of our police stations, the Melbourne West station located at Spencer Street and we can interview and hopefully get statements from any witnesses that did see things.”

Ashton refrained from sharing further details about the attacker’s identity and motive. This is some of the footage shared of the incident as it unfolded on social media:

Terrorist attack in #Bourke Street #Melbourne, #Australia
- 3 people were stabbed
- 1 person has been confirmed dead
- The accused is in a critical condition pic.twitter.com/a6s4f6MQcs