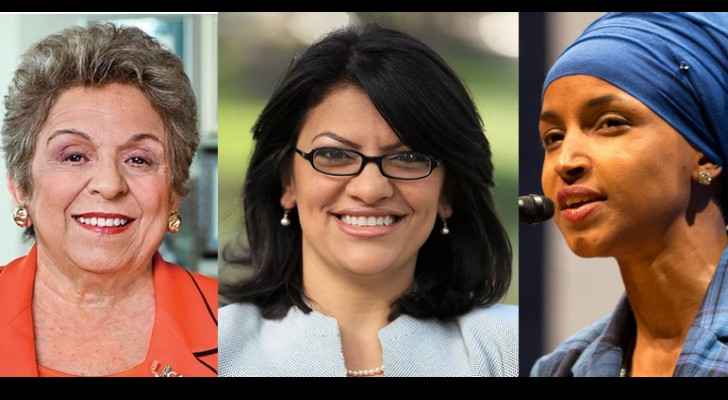 Rashida Tlaib, Ilhan Omar and Donna Shalala have become the first Arab women, in history, to win seats in the US congress, after winning the midterm elections of the Democratic Party, on Wednesday, November 7, 2018. The 42-year-old, American-Palestinian Rashida Tlaib, has won, unopposed, a seat in the US House of Representatives, after winning in the Democratic Party elections in Detroit, Michigan.

Tlaib, who became the first Muslim woman to be elected to the third Congressional District Elections in Michigan, is the eldest of 14 siblings, and was born to Palestinian immigrant parents. Her father worked at a Ford Motor factory in Michigan.
Rashida Tlaib officially entered political life in 2008, when she won a seat in the House of Representatives in Michigan and became the first Muslim woman to serve in the Michigan legislature, the second in the United States. After escaping from the Somali Civil War in 1991, the American-Somali Ilhan Omar, was able to achieve her dream in winning a seat in the US Congress as a representative of Minnesota.

Ilhan Omar will enter history as the first congresswoman to wear the hijab and the second Muslim woman, after the American-Palestinian, Rashida Tlaib, who won a few hours before Ilhan did. The 77-year-old, Shalala, was born in Cleveland, Ohio, to immigrant Lebanese parents and has held high-profile positions throughout her career.

After being nominated by former US President, Bill Clinton, Shalala became US Secretary of Health and Human Services in 1993 until 2001.

In 2001, she served as the president of the University of Miami until 2015, before running the Clinton Foundation for two years.