One for the books: Jordanian teen publishes first book at 15 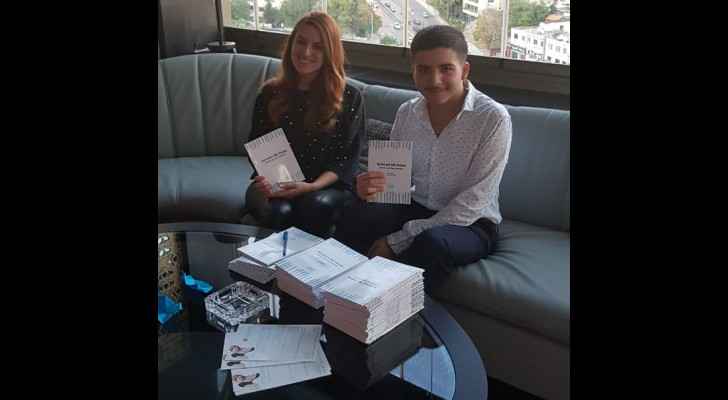 Omar Abu Agha is not your typical 15-year-old school kid: he’s an ambitious young man, who is not only hoping to save lives by becoming the next best neurosurgeon, but he has also just published his first ever book.

“Different but Unique” is the title of this indeed unique book, which Omar wrote in solidarity with the Autistic community in Jordan.

At his book launch - which took place at Skyline Sushi restaurant at the Landmark Hotel in Amman, as part of their “Make a Wish” initiative - I asked Omar what inspired him to tackle a subject that remains stigmatized by society.

“As an IB student in year nine and ten, we’re supposed to create our own personal project, so this was an opportunity for me to explore and investigate something of my own interest. And as I already had an interest in learning about autism and becoming a neurosurgeon in the future, I eventually decided on this topic for my book,” Omar passionately said, after signing copies of his book for some of those who attended the launch.

So while most 14-year-old kids spend their time playing video games, surfing the internet, watching TV or just lazing about, Omar decided to take his school project one step further and write an entire book.

And Omar’s book is anything but boring.

Because the bright student wanted his peers to be interested in learning about autism, he included brain teasers, exercises, word puzzles and more interactive materials in his publication.

I was curious to know if this young chap’s school, that’s the private Mashrek International School, was inclusive of students with special needs, and if it had designed a special curriculum or study program for them.

Omar proudly told me that “my school accepts students with special needs. We currently have three autistic students and students with other learning difficulties. Each student has a shadow teacher, who stays with them all day long to support them and explain what is being taught in class, as well as work on raising awareness amongst other students about autism and other learning disabilities.”

The first ever case of autism to be recorded in the world was in 1993. There are currently 8,000 autistic adults and children in Jordan.

But all those patients must wait their turn to be treated at the only autism-specialized hospital in the Kingdom, which is only equipped to treat 80 people at a time. As for private centres, well, they are unaffordable for the majority of the autistic population.

It comes as no surprise that Omar dreams of finding a cure for autism when he becomes a neurosurgeon.

And speaking of dreams, Omar believes that anything is possible and can be achieved through determination and optimism, which he said are “the strongest weapons a person can possess.”

I was inspired by Omar, whom I could already see delivering an inspiring speech on a Tedx stage.

Of course, I let him know that.

“I would love to influence people. In addition to becoming a neurosurgeon, I’m interested in serving the community. In the future, I plan to open a hospital and will provide a service to support any underprivileged patients,” he said.

Autism spectrum disorder is a condition related to brain development that impacts how a person perceives and socializes with others, causing problems in social interaction and communication. The disorder also includes limited and repetitive patterns of behavior. The term "spectrum" in autism spectrum disorder refers to the wide range of symptoms and severity. (Mayo Clinic)

Omar spoke to local and international experts to research his book, including Canadian Rachael Finnerty, CEO and founder of the Ontario Music Therapy Academy, Hareth Al Hajj, a swimming coach specialised in autism and Dima Maraqa, speech pathologist and CEO of Al Masar Centre, in addition to reading hundreds of online journals, articles, books and materials.

Get your own copy of “Different but Unique” from Al Masar Centre, Buffalo Wings and Rings, Autism MENA Foundation and [email protected]!

Has 'The Eyes of Darkness' book predicted coronavirus more ....