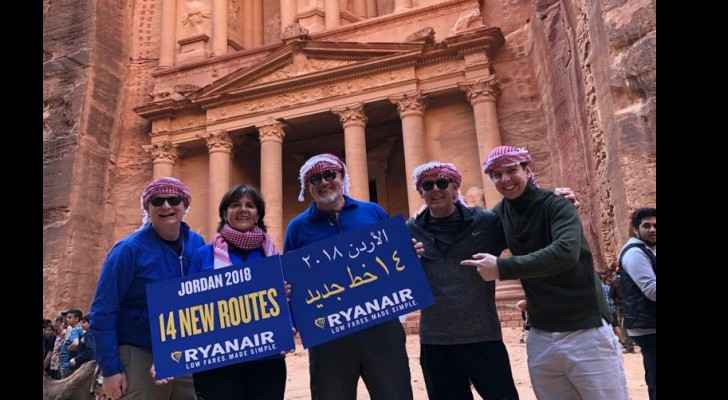 A Ryanair flight from Budapest landed in Queen Alia International Airport in Amman, marking the first voyage to Jordan.

Ryanair will be offering a growing list of destinations between Amman, Aqaba and European cities.

Every week, the Irish low-budget airline will be running flights to Amman from 14 different European cities; including Italy, Poland, Cyprus, Lithuania, Belgium, Romania, Hungary and the Czech Republic. Ryanair will also be operating flights to Aqaba from four destinations; Italy, Greece, Bulgaria, and Germany, per week.

Ryanair, one of Europe’s largest low-budget airlines, has previously announced that it will begin flying from and to Jordan in March 2018.

Ryanair will not be the only low-budget airline to operate from and to Jordan, British EasyJet airlines, Norwegian airlines, and a Russian airline.  “EasyJet will operate two flights per week from London and Berlin to Aqaba, and the Norwegian Airlines will operate two flights to Amman per week and one flight to Aqaba from Copenhagen per week,” said Managing Director of the Jordan Tourism Board, Abed Al Razzaq Arabiyat, pointing out that flight tickets will not exceed JD100.

In addition to these routes, a Russian airline is going to start operating two flights to Aqaba per week as of November.  “Currently, there are two companies from Russia that operate nine flights per week from Russia to Aqaba… The number of these chartered flights will increase to 11 per week when the third company starts operating the program,” he added.

Such flights are supposed to increase number of tourists visiting Jordan, and commercial activities in Aqaba, making travel from and to Aqaba easier, Arabiyat noted.

These new cheap airlines, will encourage tourists to make Jordan a frequent destination, as prices of tickets representing the main obstacle. “[…] This is now solved with all these flights. We now enjoy great connectivity at affordable prices for all,” Arabiyat said.

“The growth in the sector and the expected rise in number of tourists will help increase the volume of foreign direct investments in the field, which will eventually result in creating jobs for Jordanians,” an official told The Jordan times.

Minister of Tourism, Lina Annab, also emphasized that such flights, will largely boost Tourism in Jordan.