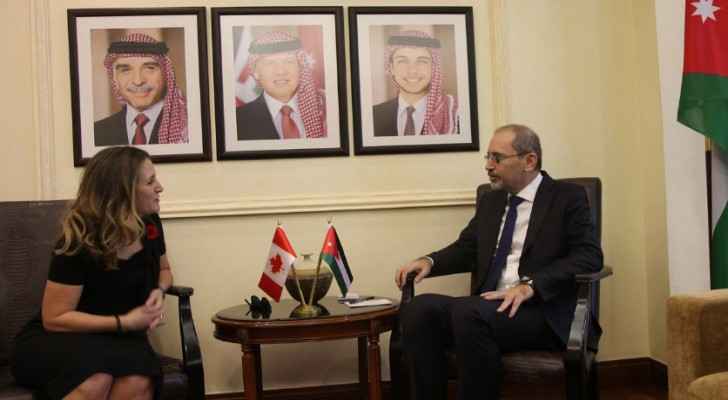 The meeting affirmed the importance of developing and deepening the collaboration between the two countries through increasing economic, investment, trade and cultural cooperation.

Safadi expressed his appreciation to Canada and its government, which has been supporting Jordan in several fields.

In a joint press statement, Safadi said that Freeland emphasized the deep-rooted ties between Jordan and Canada and the keenness of the two countries to further boost these ties.

The Jordanian FM also thanked Canada for its supportive stand regarding the Israeli-Palestinian conflict, stressing that "the Palestinian issue is a central issue for Jordan, and that peace and stability in the region can only be attained by establishing an independent Palestinian state with East Jerusalem as its capital."

The two confirmed the need on finding a political solution and launching a series of effective negotiations in order to resolve the Israeli-Palestinian conflict. Safadi thanked Canada for its continuous support to UNRWA, pointing out that the Agency plays a major role in contributing to the well-being of Palestinian refugees.

For her part, Freeland expressed condolences over the victims of the Dead Sea flash floods and expressed her wishes of speedy recovery to those injured.

Freeland voiced her pride in the strong partnership with Jordan, pointing to economic, security, trade and human rights cooperation with the Kingdom.

In her press statement, she thanked Jordan and the Jordanians for their generosity in hosting Syrian refugees, adding that the world "can learn a lot from the Jordanian model" in hosting and offering support to regugees. Freeland also explained that her country is aware that the refugee crisis is an international one and that it is keen to continue cooperation with Jordan in order to support the refugees.

"Jordan is a key partner in the Middle East and Jordan is the only Arab country with which we have a free trade agreement," she concluded.