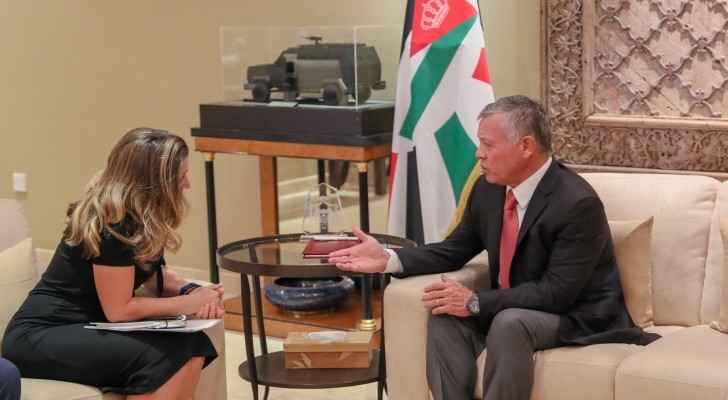 The meeting discussed the strong Jordanian-Canadian relations as the two leaders agreed on exploring further cooperation between the two countries. His Majesty thanked Canada for its continuous support in helping Jordan exert several development projects in the Kingdom.

His Majesty also stressed on the importance of reaching a political solution in the Israeli-Palestinian conflict where an independent Palestinian state is established with East Jerusalem as its capital.

Freeland affirmed that Canada looks forward to more coordination and consultations with Jordan. She also voiced her appreciation for the humanitarian aid that Jordan has provided to the Syrian refugees throughout the past years.

Both the Minister of Foreign Affairs and Expatriates, the Adviser to His Majesty and Director of the Office of His Majesty Manar Dabbas as well as the Canadian ambassador to Jordan.