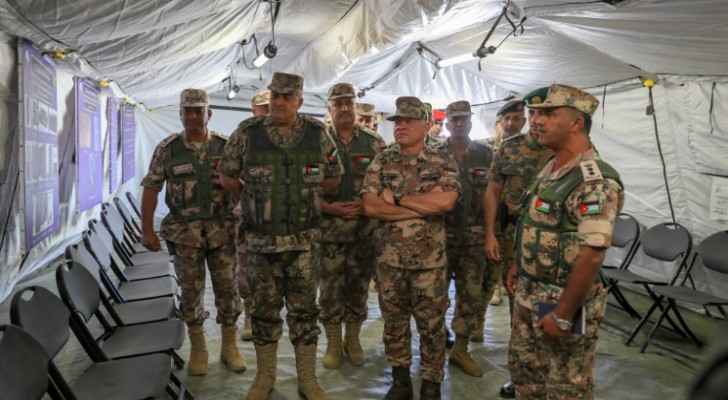 Upon his arrival at the training site, King Abdullah was greeted by Chairman of the Joint Chiefs of Staff of the Jordanian Armed Forces, Lieutenant General Mahmoud Freihat, and the Commander of the Jordanian Central Command, Brigadier General Adnan Ahmed Al-Raqqad.

At the beginning of the exercise, leaders and officers of all levels utilized the information available to prepare and carry out the assigned military operation.

The Central Commander briefed everyone on the course of the exercise, the possible scenarios, and the measures that should be taken to implement it. Al-Raqqad stressed on the importance of these exercises and how they impact the level of training and boost the readiness of the armed forces.

His Majesty expressed his pride and satisfaction in the efforts conducted, which showed accuracy, professionalism and high-skills in shooting, striking targets and coordinating between all types of weapons.

The exercise was attended by the Commander of the Royal Air Force, heads of the security services as well as a number of senior officers in the armed forces.