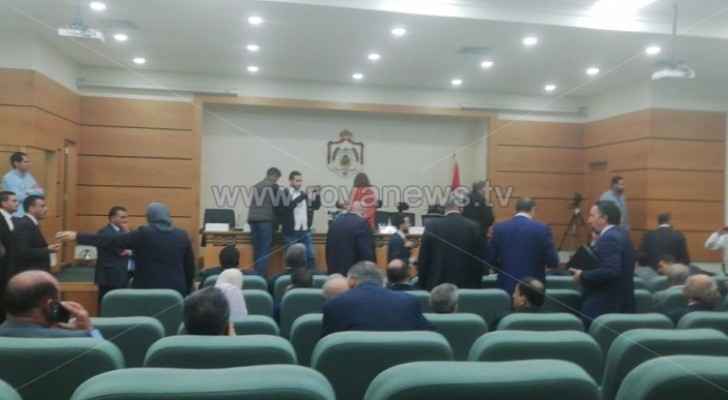 In a meeting, broadcasted publically, Ministers of the Jordanian Government and Members of the Jordanian Parliament (MPs) met together on Sunday, October 28, 2018 to discuss the circumstances affiliated with the Dead Sea Floods' case which resulted in killing 21 people and injuring 30 more, most of whom were school-students of 13 and 14 years old.

Prior to starting, Members of the Parliament objected against the arrangements of the event as Ministers were supposed to sit on a podium addressing the rest of the attendees -- something that many of the MPs found as unacceptable.

"We do not accept that the ministers sit as lecturers, we want to debate with the government, not to be dictated by it," said MPs Musleh al-Tarawneh and Wafaa Bani Mustafa.

The Committee of Education called for a meeting with seven of the Ministers in order to discuss the incident of the Dead Sea and find out the reasons behind the tragedy. Jordanian Minister of Tourism and Antiquities, Lina Annab, announced that the "tours" company which organized the field-trip for the school has been closed and that those assocaited with it have been referred to the Attorney General to be further questioned.

Annab confirmed that the license of this tourist company does not entitle it to organize adventure trips. She pointed out that the "Azraq Valley", where the field trip took place, is not classified as a touristic-site and that adventure-trips must be accompanied by a set of safety measures, which was not the case with the school field-trip that turned into a tragedy on Thursday, October 25, 2018. Minister of Education and Higher Education and Scientific Research, Azmi Mahafzah, confirmed that the school did not comply with the course of the trip that was pre-approved by the Ministry.
Mahafzah blamed the school for not sticking to the exact route of its field-trip. He explained that the trip had 26 students whose names were not included in the final list that was sent to the Ministry.

Dozens of houses flooded by rain in ....