King Abdullah II with MBS in FII (Davos in the Desert) 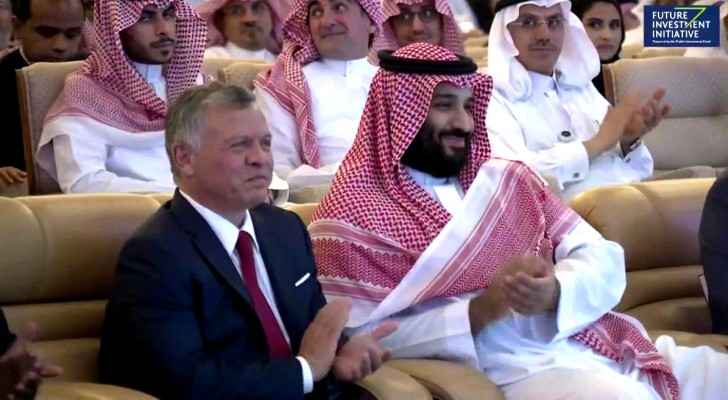 Saudi Crown Prince, Mohammed bin Salman (MBS), said that the economy of the Middle East will "change over the next five years," expressing his optimism about the ambitious plans developed in a number of Arab countries in the region.

During the second day of the Future Investment Initiative (FII) summit, in Riyadh, MBS said, “Saudi Arabia, Egypt, Bahrain, Jordan, the UAE, Lebanon, Oman, Iraq, Kuwait and even Qatar -with which we have a dispute- will have a better economy after five years because of the ambitious plans.”

MBS predicted that the economic developments in the region would make the Middle East the "new Europe”.

His Majesty, King Abdullah II, had earlier attended a plenary session about the future of technology, on the opening day of the FII, October 23, 2018.

The Prime Minister of Lebanon, Saad Rafik Al-Hariri, also attended the initiative, and discussed the Middle East’s economical transformations towards a shared future.

HRH Crown Prince Mohammad bin Salman and HE Saad El-Din Rafik Al-Hariri, the Prime Minister of Lebanon, discuss the Middle East's economic transformation and their shared vision of the future at #FII2018 pic.twitter.com/wnx3lv7Z6f

Ramadan with robots: The holy month in the year 2080

Ramadan with robots: The holy month in ....