An Ancient Greek ship at the bottom of the Black Sea was digitally mapped by two remote underwater vehicles. (Black Sea MAP/EEF Expeditions) 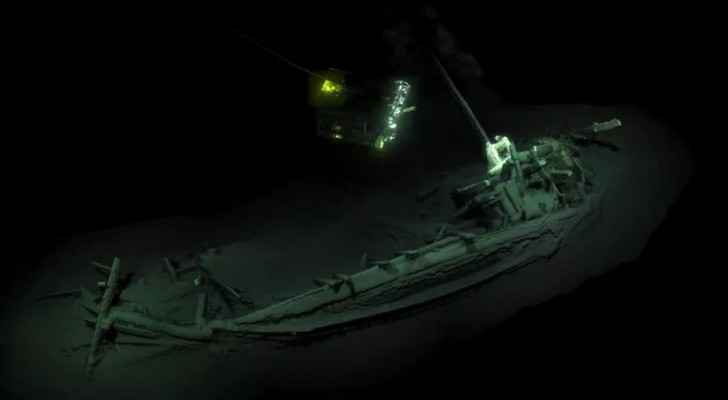 A 23-metre vessel was found at the bottom of the Black Sea, in what archaeologists believe to be the world’s oldest intact shipwreck, having lain there undisturbed for more than 2,400 years, The Guardian reported.

Researchers from the Black Sea Maritime Archaeology Project (MAP) believe the ship is ancient Greek; it was discovered with its “mast, rudders and rowing benches all present and correct off the Bulgarian coast just over a mile below the surface.”

The lack of oxygen at that depth most likely preserved it, according to the researchers.

The research team’s principal investigator, Professor Jon Adams, said: “A ship surviving intact from the classical world, lying in over 2km of water, is something I would never have believed possible. This will change our understanding of shipbuilding and seafaring in the ancient world.” The ‘Siren Vase’ in the British Museum: the shipwreck is believed to be a vessel similar to that shown bearing Odysseus. Photograph: Werner Forman/UIG via Getty Images.

The same type of ship has only ever been seen “on the side of ancient Greek pottery (dating back to the same period) such as the ‘Siren Vase’ in the British Museum,” the researchers said, who added that it was most likely used as a trading vessel.

Historically, the Black Sea has been an important trade route between Europe and Asia, particularly in the ancient world, according to History.com.

While the researchers plan to leave the ship where they found it, a small piece of the valuable find was carbon dated by the University of Southampton, who claimed that the results “confirmed [it] as the oldest intact shipwreck known to mankind.”

Those interested in the discovery can learn more about it at the Black Sea MAP conference, set to take place at the Wellcome Collection in London later this week.

#ChurchIsNotForSale is going viral on social media among ....

#ChurchIsNotForSale is going viral on social ....

#ChurchIsNotForSale is going viral on social ....

#ChurchIsNotForSale is going viral on ....