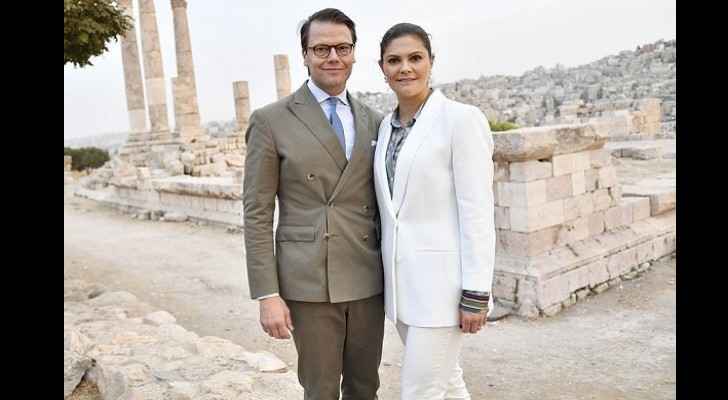 Their Royal Highnesses (TRH) Crown Princess Victoria and Prince Daniel of Sweden, accompanied by the Swedish Minister for Children and Elderly and Gender Equality, Lena Hallengren, as well as members of a Swedish delegation arrived in Amman for a three-day visit to the Kingdom of Jordan.

The Swedish Royals landed in Amman Civil Airport, Marka, in Amman on Monday, October 15, 2018. They were received by the Mayor of Amman, Yousef Shawarbeh, Swedish Ambassador to Jordan, Eric Ullenhag, Amman’s Governor, Saad Shihab, and a number of Jordanian civil and military officials.

During their visit, the Royal guests are to meet with the Royal Hashemite Family and Jordanian officials in order to strengthen bilateral ties as well as to catch on some tourism and leisure time.

Talks will be focusing on the importance of the United Nations’ (UN) Global Sustainable Development Goals (SDG); which is part of the UN’s General Assembly #Agenda2030. HRH Princess Victoria, an SDG advocate, will be discussing, with special emphesis: gender equality, climate change and human rights.

For their first event, the Royal couple, the Swedish Minister and delegation visited the ruins of Amman’s Citadel and were briefed on a historical tour into Amman’s past.

TRH Crown Princess Victoria and Prince Daniel of Sweden arrive in Amman, Jordan ahead of an official visit. The royal couple visit the Amman Citadel as their first event. Oct. 15, 2018 https://t.co/vUQrPexGQq pic.twitter.com/pNWRqWDX7X

TRH's also visited the Baptismal Site of Jesus Christ (Al-Maghtas) in the Dead Sea, guided by the Church of Sweden’s Deacon Bodin. The Royals enjoyed exploring Turki, in Naour, overlooking the Jordan Valley and the Dead Sea. They toured the forests and mountains and had a "delightful" walk through the Jordanian nature.

AMMAN 20181015 Swedish Crown Princess Victoria and Prince Daniel during a walk along the Jordan trail in Jordan on Tuesday. https://t.co/Z02k0kBIFK pic.twitter.com/ZtcKAPBuqR

The Royals, and the Swedish Minister of Children and Gender Equality, were accompanied by Jordanian Minister of Foreign Affairs and Expatriates, Ayman Safadi, in a visit to the UNRWA elementary school in the Baqa Camp, located 20 km from Amman.

Safadi expressed, on his official Twitter account, his gratefulness to Sweden and to Margot Wallström, Deputy Prime Minister of Sweden, for being a “solid, effective partner in efforts to rally political, financial support to (UNRWA) agency.”