Trash spread outside a popular market in the city centre. (Roya) 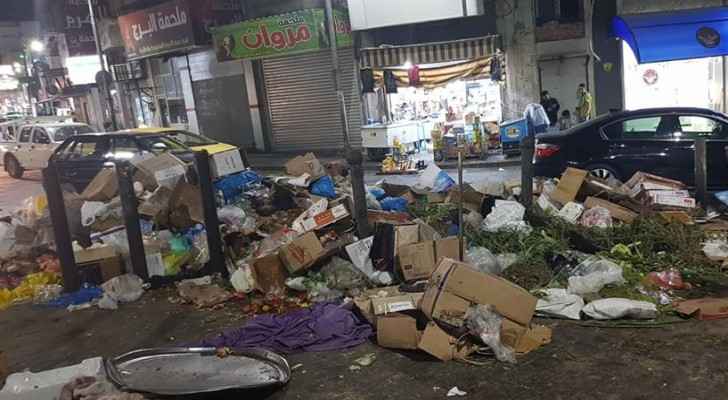 Small mountains of trash began piling up in the streets of Irbid since municipality workers went on strike on Tuesday, October 9, 2018.

Overflowing garbage bins set the scene outside shops in the city centre on Thursday, after binmen, who were also on strike, refused to go to work until the Ministry of Municipal Affairs listened to their demands.

Social media users shared pictures of unemptied council bins and cardboard boxes filled with trash outside a popular market in the city centre.

The strikes did not only take place in Irbid, but in other Governorates across the Kingdom as well.

Strikers’ demands included asking to change Saturday to an official day off, to create a savings fund for each employee, to treat municipality workers as equals to employees in other government jobs.

The Minister of Municipal Affairs, Walid Masri, had approved on Tuesday the majority of strikers’ demands, including the need for an Occupational Safety Department and a “Takaful" Fund.

Masri however stressed that Saturday as day off is an unacceptable demand, as many citizens need to process paperwork and documents on that day.

Amman's municipality hires 500 binmen all at once