The incident took place on Friday and was documented on video. (Twitter) 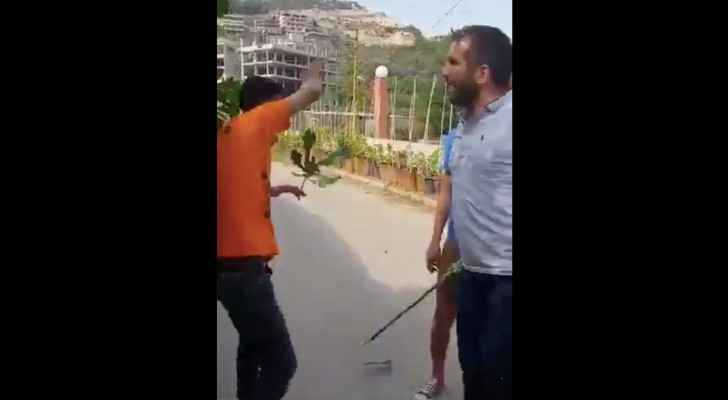 A disabled man was attacked by another man in Lebanon after the former “accidently touched his car,” social media users have said.

The incident took place on Friday and was documented on video, which showed the angry attacker beating the disabled man as he was pushed into a tree and cried out for help.

Infuriated social media users demanded that human rights organizations and Lebanese authorities take action against the offender, in an effort to prevent the same episode from repeating itself.

Facebook user Antoine Rouphael commented on the video, saying: “In this case, the monstrous attacker is the one who actually needs ‘to be treated’ and supervised by the police.”

On Twitter, disappointed user Ghassan argued that “when a dog was beaten up by someone a while ago, Lebanese social media went wild. And when one of the municipalities poisoned stray dogs, local media and the judicial system followed up on the case like nothing else mattered. In this country, a dog’s dignity is worth more than a person's dignity.”

Another tweep by the name of Naim pointed out that "had this incident taken place in another country, the attacker would have been jailed for at least five years."

Also on Twitter, Sanaa Shaikhli said that “this man does not have a shred of masculinity, since he has chosen to attack a helpless man; the same goes to the bystanders watching him attack the disabled man without offering to help.”

After the video went viral on the internet, Lebanese authorities found the culprit and placed him under arrest, while the Ministry of Social Affairs took the victim under their wing.