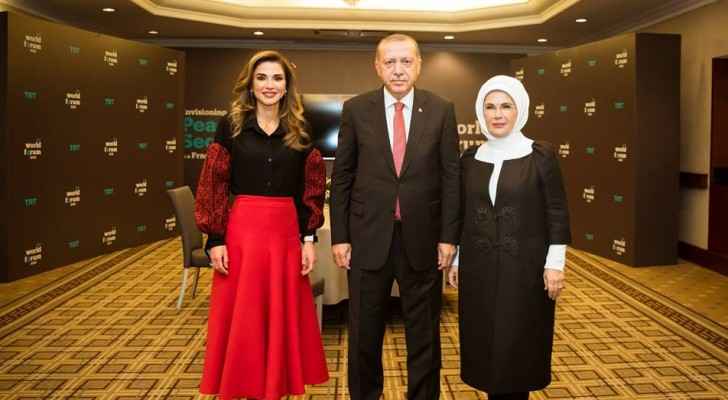 Her Majesty Queen Rania Al Abdullah delivered a speech at the 2018 TRT World Forum in the Turkish city of Istanbul on Thursday, October 4, 2018.

The Queen stressed on the importance of carrying on all international efforts in order to achieve security and peace in the world.

Her Majesty also addressed the strong cooperation and long-lasting relation between Jordan and Turkey as well as the country’s common stand when it comes to welcoming refugees and hosting them. "One of the key facets of human nature is the universal impulse to help those in need,” her Majesty added.

In her speech, Queen Rania also addressed the challenges faced by children who are deprived from their right to attend schools. Adding that there is 1 in 5 children around the world that are out of school, and that such a problem needs collaborative efforts in order to be solved.

During the closing ceremony of the Forum, Her Majesty met with Turkish President Recep Tayyip Erdogan and First Lady Emine Erdogan. President Erdogan commended the Jordanian continuous efforts in supporting refugees, as Turkey itself has 3.5 million Syrian refugees at the minute. The 2nd annual Forum was organized by Turkey’s public broadcaster TRT World.
It opened in Istanbul on Wednesday, October 3, 2018 and lasted until Thursday.
Attended by more than 600 politicians, academics, journalists, and business representatives.
The theme of this year's edition was "Envisioning Peace and Security in a Fragmented World."