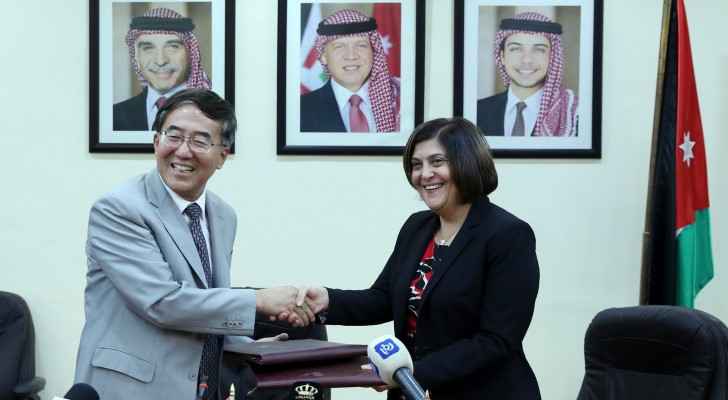 Jordanian and Chinese governments signed an agreement to finance the expansion of Al-Salt road at an estimated cost of 210 million Chinese Yuan ( around $31.5 million US dollars).

The agreement was signed earlier today, September 30, 2018, by Jordanian Minister of Planning and International Cooperation, Mary Kawar, and Chinese Ambassador in Amman, Pan Weifang, in the presence of the Secretary General of the Ministry of Public Works and Housing, Ammar Gharaibeh.

The project of Al-Salt road expansion is to extend from Al-Subaihi intersection to Al-Arda intersection, with a four lanes road that is 12.5 km long and 18.8 meters wide.

Kawar explained that this project is the first of its kind among the projects financed through the assistance of the Chinese government. Usually, such projects require that the design and implementation are Chinese, however, this project will be implemented through qualified local companies in coordination with Chinese companies in Jordan.

The grant will contribute to the Jordanian government's efforts in the field of economic and social development through improved infrastructure. The project is expected to improve traffic safety, reduce traffic accidents and positively serve associated sectors such as transport, tourism and agriculture.

The Chinese Ambassador expressed his government's commitment to continue providing Jordan with various financial and technical support programs, thus contributing to the consolidation and strengthening of the bilateral relations between the two friendly countries.

The relation between Jordan and China has been witnessing further development especially in the light of the recent successful visit of His Majesty King Abdullah II to China in September 2015, which contributed actively to the promotion and consolidation of relations between the two countries.

During the past years, China has generously contributed in financing several projects of the Jordanian government in sectors such as health, energy, water, information technology and infrastructure, including providing security equipment and civilian defense equipment.