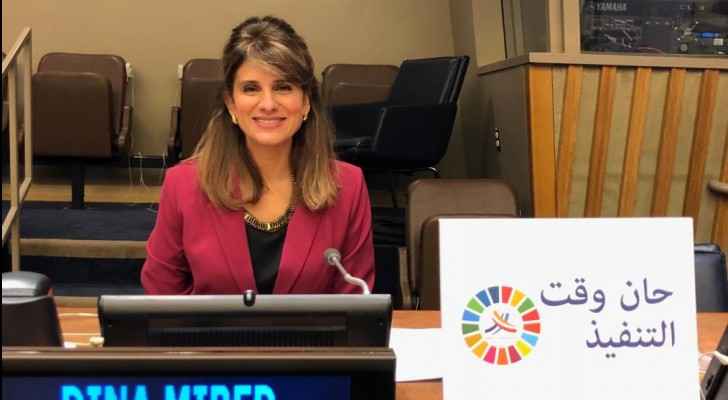 New York, Unites States, September 27, 2018 – Her Highness Princess Dina Mired, was chosen for the second time to represent civil society as “Eminent Champion against Non-Communicable Diseases (NCDs) at the 3rd UN High level meeting on NCDs in New York. Princess Dina gave her keynote speech at the opening of the session.

Princess Dina, currently the President Elect of the Union for International Cancer Control (UICC), said civil society was united in a common cause: to address the largest killers of our time; Cancer, Diabetes, heart disease, respiratory and mental illnesses. These non-communicable diseases kill 41 million people annually, with 15 million dying prematurely at the prime of their life between the ages of 30-69 years old. Developing countries bearing 70% of deaths.

Princess Dina urged Governments to start delivering on the promises made since the watershed UN High level meeting in September 2011. In her address she said, “As we speak, we are currently well on track moving decidedly to an unhealthy and injurious future, unless we resolve today to deliver on our promises and accelerate progress on the ground. We need to ask ourselves” what legacy do we want our generation to be known for? The one that watched the NCD epidemic destroy the lives of our children and our children’s children, or the generation that said enough is enough and took action, the weight of this seminal decision is on your shoulders””.

Princess Dina, also added “The world is watching this meeting today. People with diabetes, cancer, heart disease, lung disease, Alzheimer’s and other NCDs. Every letter and every word you approve in this political declaration translates into something real. You can provide insulin for millions at an affordable price, or - with a simple pen stroke - you can take it away from those who need it most. It is very personal and very real. You, our leaders, are in the driver's seat. We count on you to do the right thing and steer us all to safety”.

The 3rd UN High-Level Meeting on the Prevention and Control of NCDs is attended by Heads of State and Government to conduct a comprehensive review of the progress achieved in reducing the risk of dying prematurely from NCDs, as agreed at the First High-level Meeting in 2011 and reaffirmed at the Second High-level Meeting in 2014. The theme of the meeting is “Scaling up multi- stakeholder and multi-sectoral responses for the prevention and control of NCDs in the context of the 2030 Agenda for Sustainable Development”.