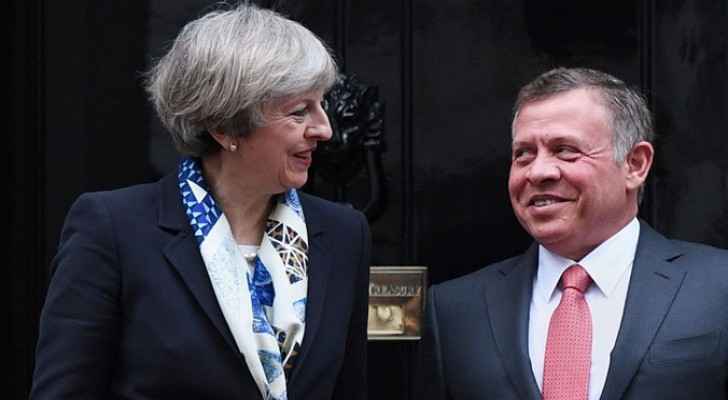 His Majesty King Abdullah II  discussed with British Prime Minister Theresa May the economic challenges facing Jordan as a result of regional crises, on September 25, 2018.

The meeting took place in New York, where the Jordanian monarch delivered a speech at the 73rd Session of the United Nations General Assembly.

King Abdullah thanked Britain for supporting Jordan, especially as the UK will hold a conference to support the economy and investment in the Kingdom next year, the Royal Hashemite Court reported.

During the meeting, King Abdullah and May looked over the historical bilateral ties between Jordan and Britain and the mechanisms for strengthening cooperation and strategic partnerships between the two countries, in all fields.

The developments concerning the peace process in Palestine and Israel were also discussed, with His Majesty stressing that a two-state solution, which guarantees the establishment of an independent Palestinian state with East Jerusalem as its capital, is the only way to end the Palestinian-Israeli conflict.

The meeting also addressed the financial difficulties facing the United Nations Relief and Works Agency for Palestine Refugees (UNRWA), and King Abdullah stressed the need to support the continued provision of relief, health and educational services provided to the refugees by UNRWA.

The king also touched upon the crises in the region and the efforts that must be made to find political solutions, as well as efforts to fight terrorism in a holistic manner.