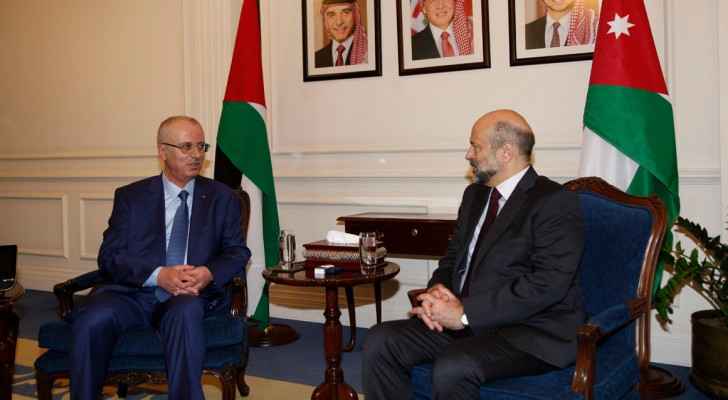 During the meeting, Razzaz asserted that the Kingdom’s stand in supporting the Palestinian cause will never change. Affirming that the target has always been crystal clear; reaching a two-state solution that ends the Israeli Occupation and allows establishing an independent Palestinian state with East Jerusalem as its capital.

During the talks, which were attended by a number of ministers and officials from both sides, Razzaz pointed out the importance of coordination plans between the two countries –in various fields including political, economic and social– under the directives of His Majesty King Abdullah II and the Palestinian President Mahmoud Abbas.

"We hope that trade exchanges between our countries reach $500 million, and this will strengthen the ties to the maximum," Razzaz added. Pointing out that the two countries share a solid history of brotherly ties that are based on constant and mutual understanding.

Efforts have been recently maximized to ensure that economic and trade deals between the two countries are being executed according to plans. Finding additional investment opportunities within the Jordanian and Palestinian business sector has also been discussed, as these investments benefit both sides and positively raise the volume of trade.

On the other hand, Hamdallah thanked Jordan for its continuous support for the Palestinians, highlighting the Kingdom’s efforts in backing for the establishment of an independent Palestinian state with East Jerusalem as its capital. He also commended the Kingdom’s keenness in preserving and defending Jerusalem and its holy sites.

Both the two officials, Razzaz and Hamdallah, agreed on strengthening their countries cooperation in sectors like education, health, economy, agriculture, trade, as well as in other fields.