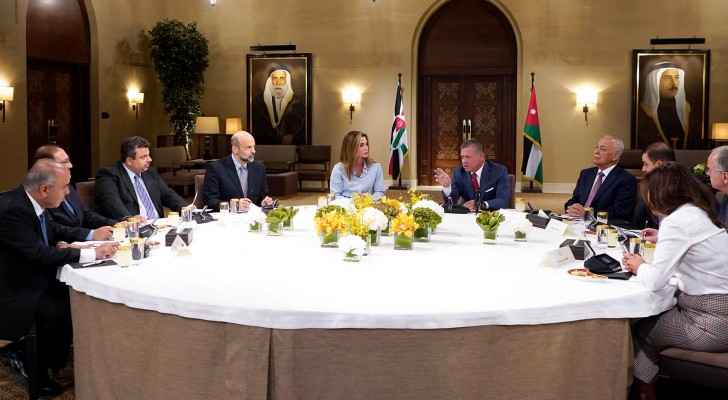 His Majesty King Abdullah II, accompanied by Her Majesty Queen Rania Al Abdullah, chaired a follow up meeting on the 2016-2025 strategy's implementation of the National Committee for Human Resource Development (NCHRD), on Sunday, September 16, 2018.

During the meeting, which was attended by Jordanian Prime Minister, Omar Razzaz, the King stressed on the importance of reviewing the already-implemented achievements and on the need of immediate acceleration of the remaining goals.

His Majesty also highlighted that the development of human resources is a strategic priority for the Kingdom, which is something that has always been a source of pride to the people of Jordan.

King Abdullah also urged the government to concentrate on the importance of educational and technical training, which is essential in empowering youth with the necessary skills that are needed to improve the economic and service sectors. As well as to further employ Information Technology to build a stronger educational systems.

Razzaz reviewed the most important achievements in the strategy’s implementation, noting that 35% of the recommended projects have already implemented as planned.

NCHRD is working at full capacity in developing a new curricula in the fields of science and mathematics in partnership with Jordanian experts and in accordance with the accredited international standards, Razzaz added.

The Prime Minister also stated that new schools have been built to accommodate the increasing numbers of students. Teachers’ training and development courses have been also maximized to go hand in hand with the number of the newly-built schools.

Razzaz pointed out that the efforts to expand kindergartens are undergoing according to the strategy’s recommendations. Plans to develop the Higher Education sector are also being pursued in order to strengthen governance in local Universities, as well as further empower the educational cadres in the Higher Education.

Minister of Labor, Samir Murad, presented the main points that are being implemented in compliance with the set strategy, which mainly focuses on enhancing the role of the private sector in developing training programs that meet the needs of the labor market.

Murad added that the project aims to increase the partnership between public and private sectors and establish an integrated framework for the institutional, technical and financial supervision that is necessary in order to improve the quality of training services and developing the technical skills of youth.

The meeting was attended by Royal Hashemite Court Chief, Yousef Issawi, Adviser to His Majesty and Director of the Office of His Majesty, Manar Dabbas, as well as Minister of Higher Education and Scientific Research, Adel Tweissi.