48.8% of newborns in Jordan are females, mostly named Joory

48.8% of newborns in Jordan are females, mostly named Joory 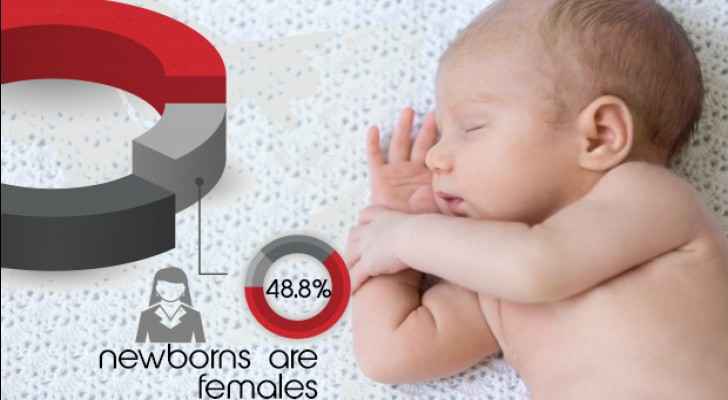 The data, which is based on numbers provided by the Jordanian Civil Status and passport Department, reflects an average number of 579.3 registered live births per day and an average of 75.4 daily registered deaths.

Compared to the year 2016, 2017 has marked a 5.7% increase in the number of registered newborns. Males secured a 51.2% of newborns while females got a 48.8% of the total number, marking a birth-gender ratio of 112.5 males for every 100 females, reported Sisterhood is Global Institute (SIGI).

On the other hand, SIGI stated that the most common name given to newborn males in 2017 was "Mohammed" which was used 9782 times, followed by Ahmed, Omar, Amir, Yousef, Adam, Karam, Ryan, Abdulrahman, Abdullah, Ali, Zaid, Ibrahim, Rashid, Hashem, Jawad, Mahmoud, Jad, Hamza and Taym.

A rate that indicates the number of live births occurring during the year, per 1,000 population estimated at midyear.