US Senator John McCain died at the age of 81 after a tough battle with cancer. (ABC News) 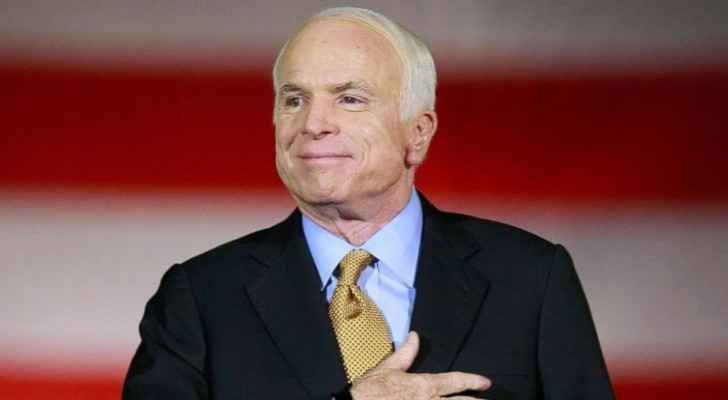 US Senator John McCain died at the age of 81 after a tough battle with cancer.

McCain, who was diagnosed with an aggressive brain tumor last year, died surrounded by his family, according to a short statement released by his office on Saturday.

The former Vietnam war hero was highly respected in his country for faithfully serving the US for six decades.
The Senator died just one day after his family announced that he had decided to discontinue treatment for glioblastoma.

After news of his death, many American politicians reminisced about the qualities they admired most about the Senator; some of those characteristics angered many people, including members of his political family, however, he never lost the admiration of the American people due to his national devotion.

Former President Barack Obama, who defeated McCain in the 2008 presidential election, said that “John and I belonged to two different generations, we had very different origins, faced each other at the highest level of politics, but we shared, despite our differences, loyalty to the ideals for which entire generations of Americans and immigrants have struggled and sacrificed for.”

Democratic party politician and Senate Minority Leader Chuck Schumer called for the congressional building where McCain’s office was to be named after him.

Current US President Donald Trump, whom McCain strongly opposed, merely offered his condolences to the family in a tweet, in which he never addressed any aspect of McCain's professional or personal life.

"I offer my deepest condolences and respect to the family of Senator John McCain. Our hearts and prayers are with you," he tweeted.

Al Gore, who served as Clinton's Vice President, said: "I have always admired and respected John because he has always worked to find a ground for understanding, however difficult it may be."

Republican Senator Lindsey Graham said that with McCain's departure, "America has lost one of its biggest heroes."

McCain graduated from the Naval Academy and fought in the Vietnam War, where his plane was shot down in the Hanoi airspace during a bombing mission and he was captured and tortured, before being released.

McCain joined the political arena more than 30 years ago as a member of the Senate, where he heavily participated in discussions about war, peace and moral trends of the nation.