450 Trees eaten up by large fire in Ajloun

Fifteen dunums of land were eaten up by the fire. (Roya) 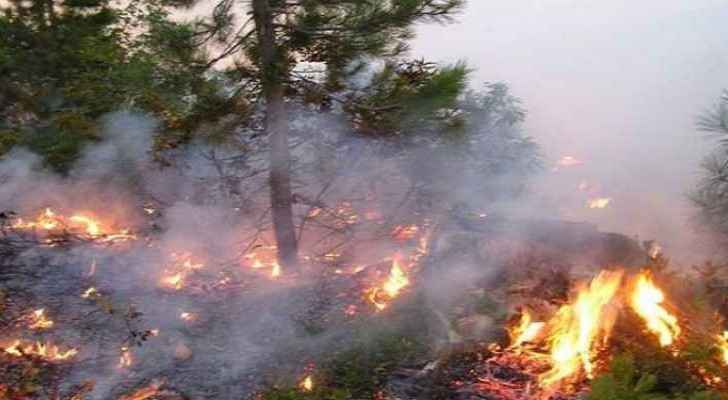 Hundreds of trees burned down in Ajloun on Saturday after a large fire broke out in the woodsy governorate.
Firefighters from the Ajloun Civil Defense Directorate (CDD) put out the fires, which spread over an area of 15 dunums (15,000 square meters).

More than 450 trees were eaten up by the flames, Director of the Ajloun Civil Defense, Colonel Hani Samadi, said on Saturday.

Colonel Samadi added that due to the location and size of the fire, his team used a firefighting airplane to beat the wildfire and prevent it from spreading any further.

The cause of the fire? Engineer Hatem Freihat of Ajloun said that the fire was caused by the incorrect disposal of dry shrub and bushes by landowners, who burn them on site, instead of finding a safe way to burn them, away from trees and other bushes.

Several forest fires spread across Ajloun and Jerash last year, which resulted in the Environmental Protection Department (Rangers) using unmanned drones to survey forests and shrublands in the two governorates.