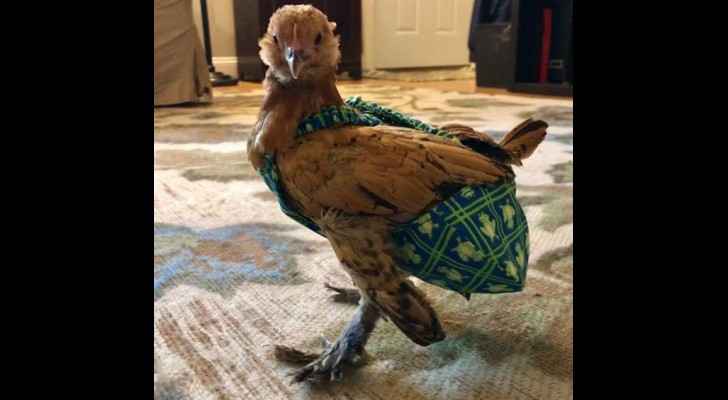 We’ve all seen cute little puppies and sometimes even fluffy sweet kittens wearing diapers, but we bet you haven’t come across a chicken in nappies yet, have you?

Yes, this is actually a thing in the US, where luxurious chicken diapers have become somewhat of a trend over the past ten years, reported Xinhua News Agency.

Why would a chicken need to wear a diaper? Well, nearly 1% of US households in the country’s biggest urban areas keep chickens as pets, not a bird that they’ll eventually put on their dinner table, a report by the U.S. Department of Agriculture revealed in 2013.

"Over the last couple of years, it has changed to people actually calling their chickens pets," Julie Baker, owner a chicken diaper brand Pampered Poultry, told The Outline.

In other words, since the chicken is flapping around the house as a member of the family, the nappies are used to catch their poop and keep the house clean.

Not according to Baker though, who laughingly said: "They are not diapers. They serve absolutely no purpose. Literally, no purpose, other than to look cute. They're ridiculous," she said.

Not only do those chickens have “underwear,” but they eat better than some of us too!

"We spend an insane amount of money. We thought we'd feed them leftovers, but our chickens end up eating grilled salmon, steak, fresh lettuce and organic watermelon," one chicken owner, Amina Azhar-Graham, told the Washington Post in March.

Hanging out inside wth the fam, without a care in the world. And no "incidents!" #sundayvibes???? #pamperyourpoultry

Surprisingly (or unsurprisingly), there is plenty of competition for producing top-notch chicken diapers, that could cost chicken owners anywhere between $17-$40 to buy.

Traci Torres, the owner of My Pet Chicken, has sold more than 5,000 self-designed diapers since 2007.

"The market is enormous and there's lots of competition," said Torres.

And you can’t have diaper-strapped chickens without them flaunting their well-designed accessories on social media.

Believe it or not, some chickens have thousands of followers on Instagram where they show off their best accessories.

How can we eat chicken again after seeing these pictures?

China's pet sitters back in business after COVID reopening

China's pet sitters back in business after COVID ....

China's pet sitters back in business after ....

China's pet sitters back in business ....