Jordan pressured to end refugee status for millions of Palestinians

Jordan pressured to end refugee status for millions of Palestinians 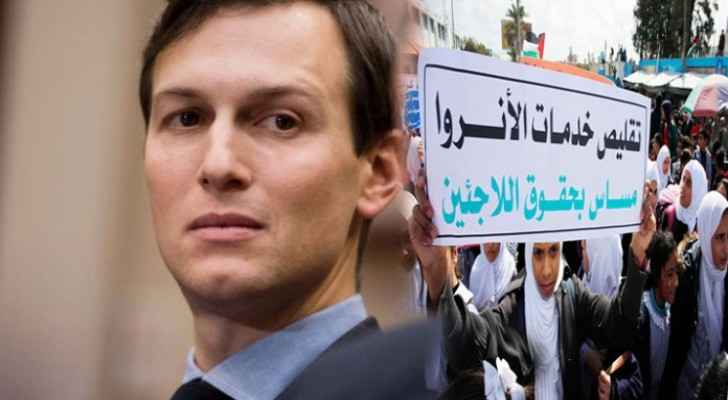 The White House, represented by Senior Adviser to the US President, Jared Kushner, has pressured Jordan to strip the refugee-status of more than 2,000,000 (two million) Palestinians in the Kingdom, Foreign Policy reported.

During his visit to Jordan in June, Kushner sent multiple emails to his country –which were later leaked– where he advised disrupting the function of UNRWA in the region, describing it a “corrupt agency” that doesn’t help in progressing the peace plan.

In the emails, Kushner referred to Trump’s decision in cutting UNRWA’s funding by $65 million (almost half of its allocated annual funds), saying that the agency's threats to shut down its schools once funds are cut are not real, as six months have passed and UNRWA did nothing.

Kushner went on by adding “our goal can’t be to keep things stable and as they are. … Sometimes you have to strategically risk breaking things in order to get there,” hinting at the importance of disrupting the UN agency.

Associated Press (AP) also revealed that Kushner and other senior officials in the US have begun recruiting a team to organize the Middle East Peace Plan.

The US National Security Council began approaching agencies to find suitable volunteers to work under the guidance of both Kushner and Jason Greenblatt; another Senior Adviser of President Trump, AP added.

The team will work in three units: one focused on political and security issues, another dedicated to economics, while the last is for strategic communications.
According to the officials, who spoke to AP under the condition of anonymity, the US State Department, Pentagon, intelligence agencies and Congress members involved personnel in the project for a span of six months to a year.

However, the launch date of executing this peace plan has not been announced yet.