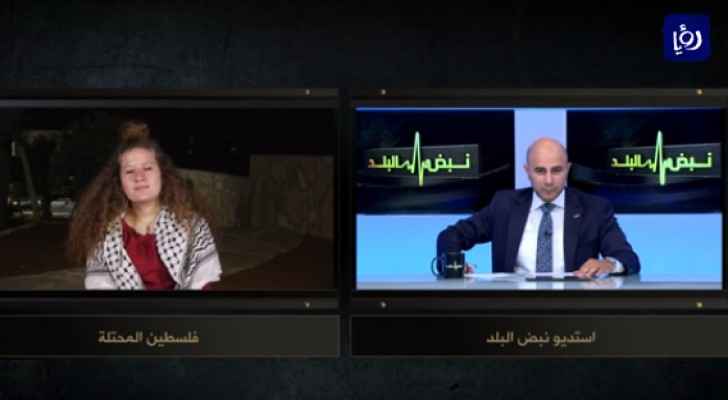 Ahed Tamimi, who was released earlier this week after an eight-month imprisonment behind Israeli bars, appeared live on Roya's Nabd Albalad program during a video-call yesterday, July 31, 2018.

Tamimi told Roya that being associated with the Palestinian cause fills her with a sense of pride as well as responsibility. The Palestinian teenager became an embodiment of the occupation-resistance since a video of her slapping an Israeli soldier (which led to her incarceration) was first released in December 2018.

Through Roya, Tamimi called on the international community to look at her case as an example of the illegal ongoing pattern that the occupation uses in dealing with anyone and everyone who stands tall against their unjust policy.

As for her future plans, Tamimi expressed her excitement as she looks forward to pursue International Law studies to later have more power in defending Palestine and the Palestinian people. Ahed Tamimi live interview after her release on Roya TV

Just after her release, the South African Mvezo traditional council headed by Mandela's grandson, Mandla Mandela, sent Tamimi an invitation to attend a ceremony where she will be granted an honorary award for being a symbol of hope, bravery, and resistance.