Ahlam posing next to the military helicopter. (Alkhaleejonline.net) 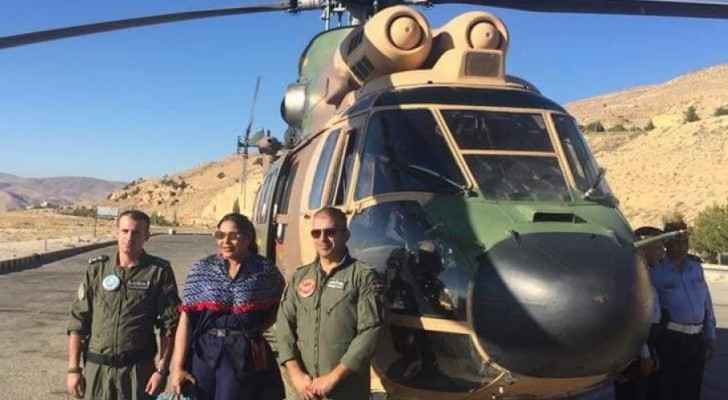 Emirati singer Ahlam was in town to perform at the Jerash Festival on Friday, but she took some time out of her busy schedule to visit Petra, in style!

And that simple act garnered heavy social media backlash, as the diva landed in the rosy city in a helicopter… a military one, no less.

After photos of the artist posing next to the helicopter went viral, dozens of social media users snowballed the Jordanian Armed Forces with criticism for allowing Ahlam to rent out the aircraft for a reported JD 5,000 an hour.

Meanwhile, others said that those helicopters must be reserved for the honourable “nashama” (Jordanian patriots) in the army.

Sadly, Ahlam’s critics failed to acknowledge that Jordan does not provide another helicopter-renting service, nor that the starlet would be producing a video upon her return to the UAE, which will promote Petra and tourism in the Kingdom.

The army did not wait long before issuing a statement to clarify the situation.

On Tuesday, they released this statement:

“Concerning what some social media users have been falsely writing about the helicopter that they claimed was especially flown out to Petra to transport singer Ahlam, we had to explain: the helicopter was scheduled to travel in that direction to transport the Minister of Interior and security personnel to Ma’an, Al Madoorah border and finally to Aqaba. Ahlam happened to be travelling to Petra at the same time, therefore it was agreed that she would rent out the helicopter to go there but not to return, and the pilot did not wait for her to complete her trip.

We cooperate with various private companies and governmental institutions whenever they request to rent out one of our helicopters, to either transport official delegations, tourists, film crews or the press. This has been an ongoing service, as no company exists in Jordan which provides a helicopter-renting service.

The Jordanian Armed Forces said that they will monitor and keep track of any person who attempts to defame the army on social media.”