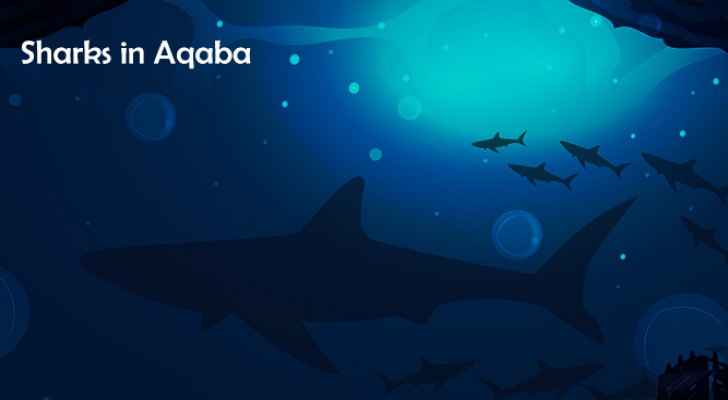 The Tiger Shark, or Galeocerdo cuvier as it is scientifically known, is one of nine shark species living in the Red Sea. The shark inhabits coral reefs and according to the IUCN Red List of Threatened Species, its conservation status is near threatened.

An adult Tiger Shark can grow to over five meters, making it the second largest species that can be found in the Red Sea.

The apex predator has a wide range of food sources, with adults mostly found closer to the floor of coral reefs- at a depth of around 300 meters, while younger specimens can be found closer to the surface in search of small prey and warmer temperatures.

The shark tends to avoid humans, making its sighting a brief and usually inconsequential encounter. In the past one month, however, fishermen in Jordan’s only seaport--Aqaba have captured and killed two Tiger Sharks.

The incident, where the captors beat the fish on their boat and left it in a pool of blood, was taped and shared on social media, sparking mostly negative reactions from the public. The video, which sparked the curiosity and criticism, was later blocked on Facebook for its violence. What are some factors that may have influenced the appearance of the sharks so close to the surface? Has anything changed and will those be isolated cases or is it likely that the Gulf city will witness more such shark encounters?

We looked at the literature on the issue, talked to a conservation specialist, and a professional diver to gain insight on the situation of Tiger Sharks.

According to the Aqaba Marine Park “reefs in Jordan are among the most threatened in the Red Sea because they are shallow, easily accessible, and adjacent to a major population and industrial center.” (source)

Their precarious situation lead the Aqaba Special Economic Zone Authority in cooperation with the United Nations Development programme (UNDP) to launch a coral reef translocation project in 2012, where operations at the Main Port were closed and relocated to the southernmost tip of Dirreh Bay.

The rehabilitation of the degraded sites resulted in the replanted coral steadily growing by “up to two inches per year, with a survival rate of more than 85 percent,” the National Geographic reported last April in the article “Why This Country Is Moving Its Coral Reefs”. (source) Reefs act as homes and nurseries for 25% of marine life.

Tiger Shark fluctuation in Aqaba could be associated with the changing distribution pattern of their natural habitat, a claim backed by a recent study entitled "Reef-Fidelity and Migration of Tiger Sharks, Galeocerdo cuvier, across the Coral Sea". According to the article, there is a strong correlation between tiger shark presence and coastal reefs. (source) On the other hand, Nedal Al-Ouran, Head of the Environment, Climate Change and Disaster Risk Reduction Portfolio at the UNDP and one of the scientists behind the coral relocation, attributed the incidents to shark migration during mating season, rather than the increase of coral reefs.

In regards to the legality of the fishermen’s actions, Ouran stressed that Jordan has signed an international agreement in 2010 which prohibits shark-hunting. The treaty is also in line with the Jordanian Agriculture Law No.13 of 2015 (source) which criminalizes the killing, possessing, transporting, selling or displaying for sale wild birds and animals.

From a diver’s perspective

Jordanian PADI-certified scuba-diving master, Omar Madain, also shared his experience with sharks and general observations. Madain, who dives on a daily basis, pointed out that the Red Sea has always been a natural habitat for many species, including Tiger Sharks, adding that there have never been shark attack reports since the 1970s. He asserted that he has encountered various sharks while diving, where they always keep their distance and prefer to swim away from humans. Madain confirmed that shark presence in Aqaba usually goes unnoticed as only young sharks swim closer to the surface and that is why they were captured.

Despite local fishermen fearing the presence of Tiger Sharks, the creatures are vital to the marine life in Aqaba.

In an attempt to show people that sharks do not pose a threat, Madain is also taking part in an adventurous “Red Sea Shark Safari” in November near Hurghada, Egypt where divers will get close to Hammerhead Sharks and Reef sharks near the Brothers Islands, Daedalus and Elphinstone Reef. (source)

In regards to shark-hunting, both Madain and Ouran expressed their disappointment of such illegal acts and urged the government to take action and preserve sharks by implementing the law.