The aftermath of Trump's star being destructed. (USA Today) 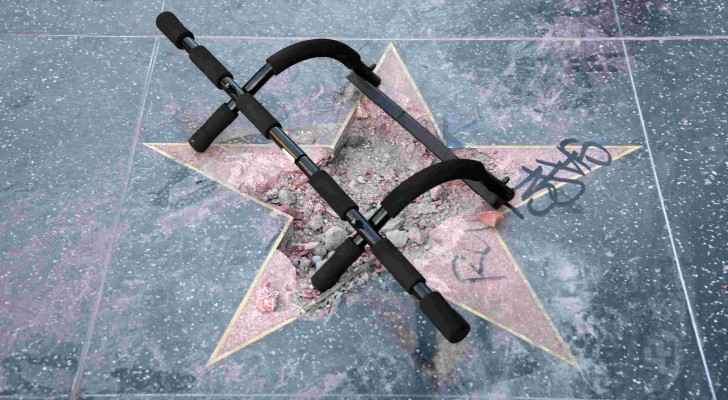 US President Donald Trump’s star on the Hollywood Walk of Fame is no longer twinkling, after it was defaced by an angry man with a pickaxe that was left at the scene, according to Los Angeles police Officer Ray Brown.

The incident took place in the early hours of Wednesday morning, just outside the Hollywood & Highland centre, a famous shopping and entertainment destination in Hollywood.

Tourists who were nearby at the time should count their lucky stars that the angry man did not charge at them.

After "going to town" - as one eyewitness described it - with smashing the terrazzo and brass star, the man ended his rage-filled moment by reporting himself to the police.

Austin Clay, 24, was held in police custody on suspicion of felony vandalism, and on $20,000 bail, CNN reported. However, the suspect did not reveal the motive behind his alleged actions.

Ironically, Clay’s bail was posted by James Otis, the man who was charged with vandalizing Trump’s star in 2016, according to TMZ.

Since the businessman entered the world of politics in 2016, the landmark was vandalized in several ways, most notably when a man allowed his dog to poop on top of the star, and another time when a street artist spray-painted a Swastika and “mute” icon around it.

With all of this happening, the Walk of Fame officials did not bat an eyelid.

CEO of the Hollywood Chamber of Commerce, Leron Gubler, said in a statement that "When people are unhappy with one of our honorees, we would hope that they would project their anger in more positive ways than to vandalize a California State landmark.

"Our democracy is based on respect for the law. People can make a difference by voting and not destroying public property."