Under the sea: First aquarium in Palestine opens in Ramallah

Fish and other maritime species at display at the newly-opened Palestine Aquarium. (WAFA Images / Shorouk Zeid) 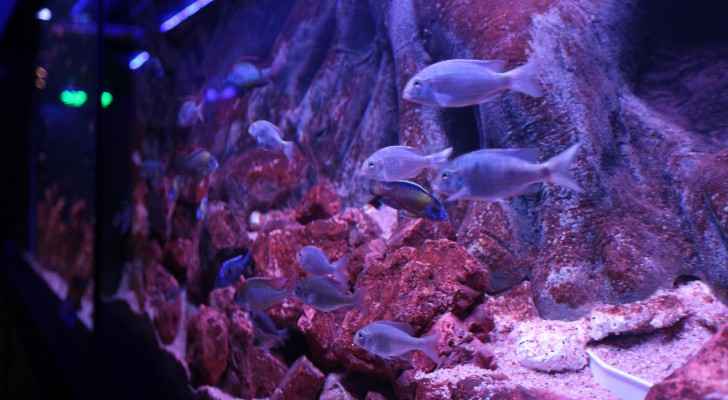 Under the sea, there’s a lot to see, and now Ramallah has a new tourist attraction for anyone interested in seeing numerous types of fish, of all shapes, colours and sizes, in one place.

As well as seeing a variety of fish, visitors can feast their eyes on different types of amphibians and tropical plants.

You can find all those in the first aquarium to open its doors in Palestine. The attraction opened its doors on Sunday, bringing the West Bank an 820-metre glass structure, displaying 250 unique and rare underwater species.

Project engineer, Sufian Qawasmi, said that 90% of those creatures are entering Palestine for the first time ever.

In the near future, visitors will be able to marvel at jellyfish, seahorses, sharks and other types of fish, but for now, they can see colourful coral, and Red Sea fish and Nile crocodiles swimming around.

"We got these fish from different seas, oceans and rivers around the world, and we expect more kinds to arrive in the coming period,” Qawasmi added.

The Palestine Aquarium was supposed to open four months ago, however, Israeli restrictions prevented the species from arriving on time, with delays of up to six months, causing the fish and project owners major financial losses.

"The transfer of fish from one country to another usually takes three to four days. But it has been six months due to the Israeli obstructions, which took a long time and cost the company more money," Qawasmi told WAFA.

The aquarium is an opportunity for Palestinian kids and residents, who are unable to travel, to see sea creatures that they’ve only ever laid eyes on by watching National Geographic.

One parent in Ramallah was delighted by the new addition, and said in a post on Reddit: “There's really not alot for kids to do in Palestine other than play in the streets and when you're playing in the streets during a military occupation that's how friction can, and often does, start. So as a parent, I'm glad that this place opened. + my kids are really into nature and animals and stuff like that so they were really happy to see sharks and alligators and various kinds of fish for the first time in their lives.”