Jewish visitation to the compound is permitted, however, non-Muslim worship is prohibited. (Roya Arabic) 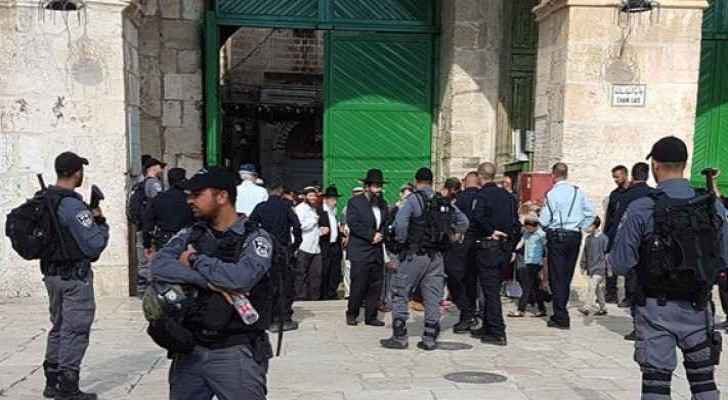 Hundreds of Israeli settlers stormed into Al-Aqsa Mosque compound on Sunday morning in the form of successive groups, under the armed protection of the Israeli police, to mark the Jewish holiday “Tisha B’Av,” local authorities reported.

While the settlers performed Jewish religious rituals in the compound to celebrate the holiday, Israeli police escorted several right-wing settlers away from the premises.

Meanwhile, the heavily armed Israeli police officers deployed at Al-Aqsa Mosque’s entrance gates set up iron barriers to prevent anyone from entering without being stopped first, and confiscated ID cards from Palestinians, before allowing them to enter the compound.

Jewish visitation to the compound is permitted, however, non-Muslim worship is prohibited, according to an agreement signed between Israel and the Jordanian government after Israel’s illegal occupation of East Jerusalem in 1967.

Despite the agreement with Jordan, the custodian of Al-Aqsa Mosque, Israeli authorities regularly allow right-wing Jewish visitors into the compound, despite their relentless efforts to unsettle the status quo.