The festival will run until August 4 in Jerash and Amman. (Facebook) 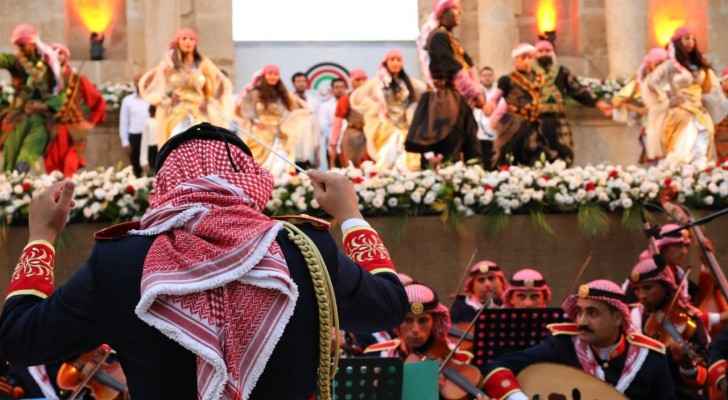 On Thursday evening, we headed out 48 km north of Amman to cover the opening ceremony of the 33rd Jerash Festival of Culture and Arts.

After a few short speeches by Biltaji and Lozi, we were treated to a national song that was written especially for this occasion, accompanied by a live orchestra.

The song, performed by Jordanian singers Nidaa Sharara, Thameen Haddad, Ghada Abbasi and Ghaleb Khoury, celebrated the theme of the festival, which marked Jordan’s 72nd Independence Day (May 25) and the 50th anniversary of the Karameh Battle.

And then, it was time to light the famous torch to officially kick off the festival.

Once the torch was lit, we walked through the ancient ruins towards the Oval Plaza, which was lined up with stalls selling local products, including foodstuffs and handicrafts.

On the way to the Plaza, we chatted to a wonderful bread-maker from Ajloun.

And then we stumbled upon this interesting surprise.

Before finally ending our journey at the Plaza.

That same evening, the Southern Theatre was lit up by two performances by Jordanian singer Hussein Salman and Lebanese superstar Assi Helani.

From July 20 until August 4, Jerash Festival will feature performances by several local, Arab and international singers, troupes and poets in both Jerash and Amman.

Several other governorates, including Irbid, Karak, Salt and Zarqa, will also host events as part of the festival, according to Biltaji.

The festival was established by Her Majesty Queen Noor in 1981 and it is considered as one of the leading cultural events in the Middle East and North Africa, and important part of the Kingdom’s economy.