During Razzaz meeting with Reform Bloc members on Thursday. 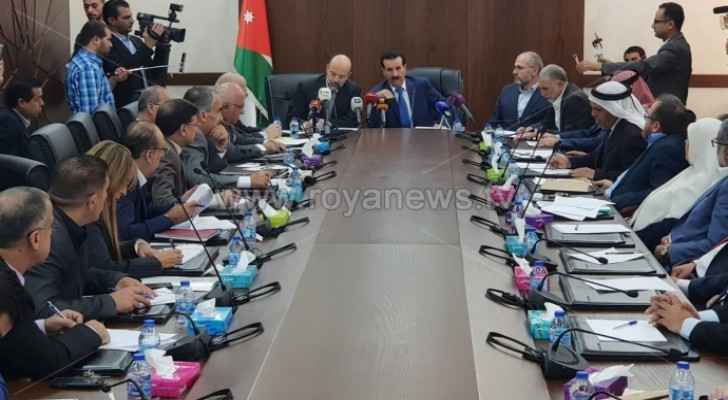 Prime Minister Omar Razzaz announced that the Minister of Labor, Samir Murad, will head to Qatar next week to discuss Jordanians’ employment program.

During his meeting with members of the Reform Parliamentary Bloc on Thursday, Razzaz advised the youth to beware of uncredible employment sources.

"We have to reconsider the 'National Military Service' and find a similar program", Razzaz added.

Razzaz promised to provide a detailed program of his ministerial statement within 100 days.

Head of the Reform Parliamentary Bloc, Abdullah Akayla, said that the meeting with the Prime Minister and his cabinet members was not for consultation as much as it was a form of protocol.

Akayla pointed out that the issue that Jordanian have with their governments is policy-realted and it not personal, and that the policy has always been the same regardless of who is in charge.

"We propose constitutional amendments that will restore the general mandate of the government... and the establishment of a National Security Ministry that would be responsible for the General Intelligence entity, and accordingly held accountable infront the House of Representatives.

"The current government’s statement is a continuation of previous statements, and we hope to see a different application. This Cabinet doesn't include any of the national or Islamic influential figures" Akayla said.

"We must allow a Jordanian movement to take place in both local and international regions, and strengthen the cooperation with other countries like Turkey, Qatar, Malaysia and Pakistan." he added.

For his part, Member of Parliament Saud Abu Mahfouz said it is unreasonable of the government not addressing the issue of raising employees’ salaries.

Member of the Parliament Nabil Shishani pointed out that there was no clear mechanism for youth empowerment in the ministerial statement which was announced last week. Shishani reassured youth empowerment isn’t solely based on providing job opportunities, but by protecting these young men and women from social scourges such as drugs. It is essential to educate and prepare youth in order to be able to protect their country, he added.